Review of their gig in the Olympia Theatre, Dublin, 18 December 2005 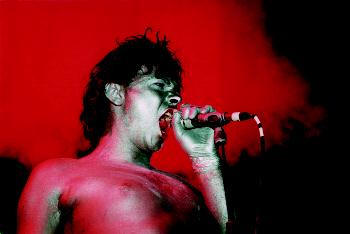 Review Snapshot:
Well after months of rumour and 'will they, won't they', Whipping Boy make a live return, their first gig since before I even heard of them. The only thing I didn't know was that Feargal McKee was a bit of a showman; albeit a desperate looking middle-aged Lothario in his leather pants and cringe inducing "we want a revolution!" to the mainly thirty-something crowd. This was no honeymoon let me tell you...

Full review:
I was looking forward to seeing Whipping Boy. I like them. I like McKee's offhanded lyrics that are atypically Irish, his sometimes over earnest romanticism and the band's ability to sweep a listener off their feet in a way that only music can sometimes do. That is the Whipping Boy I know from record. After this experience my jaw was left unhinged by what I had seen. A man completely overcome by his own 'performance' that was in fact much akin to a weasel on speed. To put it plainly, he couldn't sing for the life of him. Take the opening thrash of 'When we were Young' which was transformed from a sweet ode about acting the mick as a kid into a punk song that barely lasted 2 minutes. I think at least two guitars were lost in the mix, and  the point of three guitarists was lost on me. Problems in sound were adjusted by 'Bad Books' which had the few fans singing along, albeit more of a morose mumble.

A devastatingly bad 'Twinkle' was an abomination compared to its recorded version, while the two 'Submarine' album tracks are welcomed, much to my surprise. McKee's voice can be appreciated when he doesn't raise it so much that his inability begins to show. 'Users' actually stands its ground while 'Ghost of Elvis' showed some momentum was being gained which is interrupted as they depart for the encore. A lovely mess of guitars brings 'No Place to Go' to life and a sing-along of 'We Don't Need Nobody Else' brings things to a much needed closure.

In all fairness the crowd were just as bad as the music. Feargal was revved up while the audience were showing their annual Christmas time cracks. It didn't help that it was a Sunday. A lot were from the trendy-twenty-, thirty- something parade that go to the-most-hyped-gig-of-that-month, knowing one or two songs, and proceed to get rather inebriated.

Personally I think the band looked as if they were content at having to endure McKee's shenanigans on stage (and off) in order to get the money. Since these shows were meant to be a testing of the waters, there seems in my opinion to be no need to go out any further. Get the records (if you can) and appreciate an unacknowledged Irish institution for what they really were. Just don't bother seeing them live if this was anything to go by. If you do, watch out for the leather trousers and curly mullet. And don't tell me I didn't warn you.

Check out the CLUAS.com interview with Paul Page of Whipping Boy (originally published in May 2000)