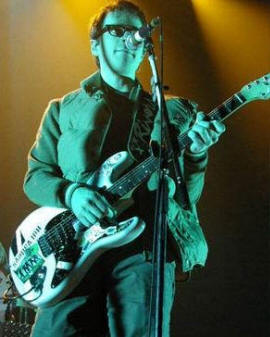 Review Snapshot:
We hated them for staying away, we loved them for showing up. I'm standing in a venue full of people who believe the band are only here because of their endless, muttered prayers, it's going to be one hell of a night. Weezer finally come to Dublin.

Full review:
Was the gig any good? Was the big bang bright?

I'd love to review the gig, but to do that you'd have to be an impartial observer, not one of the lemmings that heads towards the stage the minute the first power chord breaks free of the drum beat and drags your animal brain to the fore. Stops you being a person, and start being part of the heaving mass.

There is a point in every pure rock gig where the human mass has lifted you clear and you've lost control of where you're going, lost track of where you were, even lost the ability to draw breath. You're seeing the world through a haze of sweat, some of it yours, most of it belonging to the mob, you know the band are taking it to town, but you can hear nothing but your own tuneless rendition above the roar. And you'd give anything for it to last forever.

Weezer were sharp as a razor, top of their game, fresh from the oven and flavour-filled. I'm straining tired metaphors trying to squeeze a hint of their excellence onto the page. Let's just say the boys can play and leave it at that.

The set was a mix of mostly old stuff with enough of the new stuff to remind the one person in the building that hadn't picked up the new album that they should break into Tower records on the way home, leave a twenty on the counter and help themselves to a copy of it.

Vicar Street was built for this type of setup. The sound is great. The size small enough that those less prone to taking part in the bone-crushing maw of the mosh still got a good look at the Woody-Allen-a-like front man, and big enough that, when the mosh is collapsing and it decides that veering to the right was the way it always wanted to go, there's enough room for it to go there without anyone tasting the wall.

In short, a great gig. A good time had by all. And if anyone needs me I'm in the queue for tickets for their next gig, whenever that might be.

Check out a review of Weezer live in Barcelona in 2002.