What a difference a couple of months make? The last time I saw Wallmark headline a gig, they seemed slightly unsure of themselves and uptight. Tonight however they played music that deserves to find as wide an audience as possible with the self-assured air of a band that knows what they're doing, and that what they are doing is damn good to boot. Don't get me wrong, they weren't arrogant (far from it, they're in-between song banter was witty and self-effacing), but they when they played they had a belief in themselves that was obvious for all in (a hot, sweaty and packed) Whelan's to see. 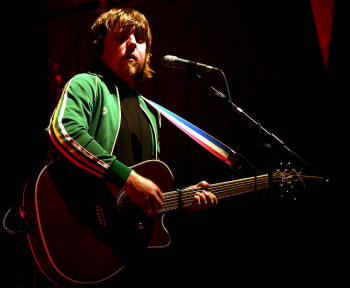 Out of the thirteen original songs they played I counted nine that as they stand would be worthy to be released right now. Out of those nine, there are five possibly six absolutely blinding tracks. They've re-worked some (e.g. "Question for You") to such an extent that they are totally unrecognisable to what I had heard previously. The fact that the chorus had stayed in my head after such a long time shows how catchy the song was originally. It's even better now. The band is not afraid to use more dynamism in their songs, instead of straight out R.O.C.K. and the obligatory "quiet bits" they now shade the songs, giving them extra depth, which gives the listener more to explore.

Apart from a slight hitch during "Too Much" when Padraig had to change his guitar, and necessary tuning times between songs (which were padded out with chatter), the hitches which were present at the last gig were largely minimised.

The songs themselves had echoes of the Jam (the band wore their heart on their sleeves with a cover of a Jam track), Ocean Colour Scene, and occasionally Deus, but never aped them. Instead they crafted original songs which grabbed attention immediately with strong melodies, catchy chorus' and loud guitars. Lyrically there seemed to be a slight theme of fighting with darkness, or a darkness within.

Although the last song "Watching Ships Fall" including the Fresh Prince of Bel-Air rap (definitely a 'you had to be there' moment!) was a close contender for highlight of the night, "Starlight" stole it for me. This is a definite anthem in the making, and is an indicator of just what Wallmark have to offer.

This is a band on the upswing to something great, and you should definitely catch them if you see they're playing near you.

Check out another review of Wallmark live in March 2002