Review of their gig in Whelan's Dublin, 6 February 2004

If the management of Dublin's Outback bar and the Down Under bar were scratching their heads wondering where their missing Aussie clientele was on Friday one look into Whelan's would have given them their answer. It seemed like every Australian in Dublin packed into Whelan's on Friday to see their beloved band from back home - The Waifs. 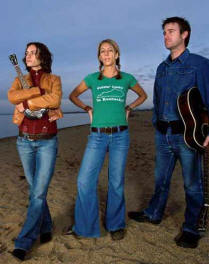 The Waifs are two sisters Donna and Vicki Simpson and a guy called Joshua Cunningham all of whom write and sing their own songs. Their acoustic country sound with harmonicas, violins and vocal harmonising would usually be considered all-American but with their strong Down Under accents coming across loud and clear there was no mistaking where this band hailed from.

Touring across America with Bob Dylan and appearing at the Cambridge folk Music Festival, The Waifs do seem to be gaining quite an enthusiastic following of fans who are loving songs from their recent album 'Up All Night'. Listening to the album, personally I found their country sounding guitar style was good but not quite up to the standard of similar bands such as the fantastic Be Good Tanyas, Dixie Chicks or the Cowboy Junkies. From the twelve tracks on the album I would rate 'Lighthouse' as the best and from the gig at Whelan's it would seem that a lot of people would agree as this was the song that everyone danced and sang to. Other popular tunes of the night were Donna's homesickness song 'London Still' and Vicki's tale of touring America 'Three Down'...and the great 'Flesh and Bones.'

Where Josh's voice was truly dreary Vicki Simpson's voice was absolutely amazing, belting out moody numbers that really touched your soul. The big highlight was towards the end of the night where Vicki was left on stage alone to sing a song about her father. The song was a melancholic number which she finished with a slow blast on her harmonica, which soon became a long harmonica jamming session, which in turn became a huge jamming session with the rest of the band rejoining her back on stage. Fantastic.

On the whole though the gig bordered on the good, but certainly not great. Little things gave the whole performance a strange atmosphere. It would be fair to say that none of The Waifs looked particularly happy to be performing that night- it didn't seem to be nerves - maybe they were tired but from the start the walk on was full of forced smiles and a rather 'God-do-we-really-have-to-be-here' type of attitude. There were no signs whatsoever that they were enjoying themselves, no little in-between songs banter either among themselves or with the audience. In fact there was no real attempt to connect with the audience at all. Well, with the exception of a few notable 'attempts' such as the time when Donna asked if the audience at the front would mind not smoking because it was getting to Vicki (she was pregnant at the time). And then there was the time the audience greeted Vicki's announcement that they could only play until 10.30pm with good-natured boos and she proceed to tell us that she 'couldn't give a shit' what we thought (the early departure was due to the fact that they were going straight from Whelan's to RTE to play on the Late Late show). Things were a bit more positive when we were informed it was Vicki's 30th birthday and there was a little bit of a smile when the crowd sang her 'Happy Birthday'. Only a little smile though.

I think if we got them in a good mood maybe the night would have felt different but they had their chance and - unfortunately - it doesn't seem as though they could have been bothered to take it. Rating for concert? Not more than 6 out of 10.