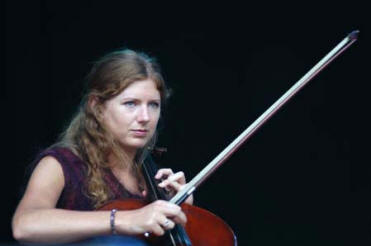 Review Snapshot:
Vivienne Long has stood in the shadow of others for too long. This is where she steps - blinking - into the light, and lights the place on fire.

Full review:
Another gig gets added to the list of gigs where I thought I was going to have the venue to myself. Another gig where I thought I was one of very few people who would care to see this one-time support act play a headline show. Sure, I loved them the last time I saw them, and sure, there were a few people there, but they were all there for the headliners weren't they? It'll just be me (and my friends with more taste than I who said we should go).

The last time I felt like this, I was going to drop in to an album launch I'd heard about, a guy I'd watched do support for Suzanne Vega, one man and a guitar and some nice vocals. It'll be empty. I'll show up just to show support. It turns out some other people had heard of Damien Rice and I had to kill three people to get a ticket.

What you should realise, and probably have by now, is that I'm not very clever.

A quiet pint in the front of Whelan's, we wander out to get tickets, it's early yet we'll be the only people in the place... Why is the queue from the box office so long I can't get out Whelan's front door?

It turns out that I'm the only person in Dublin to realise that virtuoso cello is in this season, and that it'll be a scrum to find some where to stand never mind the seat with a good view of the bar I'd imagined when I left home this evening.

The opening act is David Geraghty, of Bell X1 fame. He specializes, it seems, in piano, guitar, and apologising for sitting with his back to us. Great set, well delivered. I'm a sucker for semi-acoustic guitar, and the sound he was getting out of it was fantastic. Someone who could tell me what the song with the line "Wednesday's feet in Tuesday's shoes" is from would make my day and probably earn a pint.

After he's finished, I glance across the room. It's packed, rapt faces illuminated by the reflected stage lights. The gap between the support and the main event is longer than you'd like but short enough that anticipation still outweighs irritation. There's a movement stage right, and on they come. Four cellists, a drummer and a pianist.

She opens with something of her own, "Call Me", I think is its name. It's good, and it gets better from here. They mix it up, some covers, some original numbers. Predictably enough the covers get the biggest cheers, if you're choosing from all the songs that have ever been sung you'd need to be a fool not to pull out a great set. But despite the competition, her own stuff holds its own.

Before the gig I'd have been the first to sign a petition to say that "Purple Haze" should never be performed again. Hendrix was a genius but he's gone. It turns out I'd have been wrong. The rule needs to be "Purple Haze should never be performed on a stage with any guitars". The cellos screech and moan tearing through the riffs (are they riffs when they're played on a cello?). Here we are rocking to a string quartet, the oddest feeling in the world.

The hits just keep on coming. "Get Back", a highlight of the Bam Earthquake charity gig a couple of years ago, gets rolled out again. I couldn't be happier. It's what I heard her do first and it's why I'm here tonight. "Bohemian Rhapsody", with the cellos replacing all the instruments and doing a pretty good job at the vocal line is spectacular. "Summer in the City" by The Loving Spoonful has the whole room swaying side to side.

The end has come and gone, we've gotten the encore we knew was coming but still we cry for more. After many cat calls, wolf whistles and general noise making, she gets called back to do "Seven Nation Army" by the White Stripes. We've heard it before, we love it anyway and we'll be humming it all the way home.

The house lights come up, the crowd breaks, and all that's left to do is try and remember if there's any mixer left back in the flat for that vodka you reckon your housemate's forgotten. Great gig, great night.