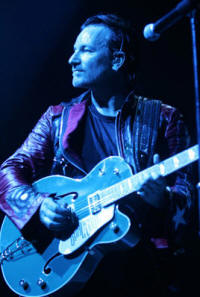 Review Snapshot:
U2 struggles past some glitches to produce moments of magic and beauty.

Full review:
As the lights go down, different voices shout "Everyone... Everyone...Everyone...". Then the guitar intro to "City Of Blinding Lights" begins the show, with glittering mirrored confetti falling over the crowd, and the much anticipated light-curtains help U2 produce a quite magical moment. Magic and inspiration is what they seem to be shooting for.

U2's latest show is all about the world coming together. That's nothing new for this band, but it's with a new scope and an enlarged language to inspire with. The whole show focuses around the Universal Declaration Of Human Rights, which is dramatically presented on the screens as "Running To Stand Still" is expanded from a junkie's tale into something much bigger.

The reaffirmation of those rights is everywhere in this show, from "Beautiful Day" to a war trilogy- "Love And Peace Or Else/Sunday Bloody Sunday/Bullet The Blue Sky". They continue on in the plea for help in the African nightmare, "Pride/Streets/One".

This being the first show, there were some missteps, some missed cues, etc. It was kinda refreshing to see these ultimate professionals squirm a bit at the newness of this presentation. At one point we watched Bono, Edge & Mullen huddling together (with spotlights and cameras one them) conferring about what to do next, as Clayton left the stage to get a bass that worked (it and it's mid-song replacement appeared not to be working during "One"). It was like seeing a regular band in a club.

But when their big production pieces worked, they were grand. It all came together in "Love And Peace...". Bono & Mullen out at the far end of the runway, with a tom tom and cymbal, Mullen begins the song there, then retreats to the main stage and Bono takes over pounding the drum. He has on a bandana with religious symbols. As the song ends a lone spotlight stays on Bono, pounding away with arms flailing, feet stomping, demanding action. It was beautiful. They followed that with a reinvigorated "Bullet The Blue Sky", Bono now blindfolded with the bandana, on his knees like a tortured prisoner, wrists crossed, chanting "These are the hands that built America", as an ominous jet fighter floats across the light-curtains.

The Edge's guitar lead in "Bullet..." is the strongest that I've heard. He seems to be on a roll, trying new guitar sounds everywhere that keep old and new songs exciting. He continues to reinvent these songs, and proves wrong the talk of U2 plateauing.

The touted technology is beautiful, subtle, and not overdone. I wanted more of the light-curtain magic, but that will come as the show is honed. I'll wait for the DVD. 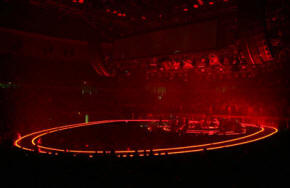 The show ended with "40", Edge on bass, Clayton on guitar, singing a new song. As in the old days, they leave the stage one at a time, leaving Mullen playing along with the crowd's chorus of "How long... to sing this song". Before leaving the stage empty, he first plays the beat quietly, then gives a fierce burst of drumming that turns the song, and the proclamation of human dignity, over to us.

Now, on the flipside:

ONE HUNDRED AND SIXTY-THREE DOLLARS!!!

This from a band that then asks us (the stiffs for whom $163 is a lot of money) to donate more of our money to their very worthy causes? I have loved U2 for a long time, but this is just greed-charge it because you can get it. It would go a long way if they announced that 20% of the ridiculous price was being channeled to the African poor. Maybe it is, but I'd feel better about that kind of ticket cost (with hungry, cold children within a half-hour drive across the Mexican border) to know that it's not just ugly greed.

To misquote an old friend, "I wouldn't pay that to see Jesus walkin' a tightrope". Alas, they charged that obscene price, and we paid. That calls for a bit of U2-style soul searching.

Set list in San Diego:
City of Blinding Lights
Vertigo
The Electric Co.
An Cat Dubh
Into the Heart
Beautiful Day
New Year's Day
Miracle Drug
Sometimes You Can't Make It on Your Own
Love and Peace or Else
Sunday Bloody Sunday
Bullet the Blue Sky
Running to Stand Still
Zoo Station
The Fly
Elevation

Encore:
Pride (In the Name of Love)
Where the Streets Have No Name
One
All Because of You
Yahweh
40