Despite being signed to Subpop at the height of grunge, Greg Dulli and The Afghan Whigs were musically a world away from their label contemporaries, mining the depths of Stax and Motown for their inspiration. The regularly played Curtis Mayfield and Stevie Wonder covers in their live shows and cut an EP "Uptown Avondale" which cemented Dulli's soul aspirations with covers of Freda Payne's "Band of Gold" and the Supremes' "Come See About Me". The Whigs threw in the towel in the late nineties and Dulli has gone on to release two albums under the moniker "The Twilight Singers". Originally conceived as a "concept album" project, it has featured a loose collection of musicians including "The Screaming Trees" and re-mixers, "Fila Brazillia", with the first album "Twilight" being decidedly hard listening, its downbeat tempo and overwrought vocals making it very much a late night, in the mood experience. Thankfully for Whigs fans, the latest release "Blackberry Belle" is a return to the more vibrant sound of their later work such as "1965". 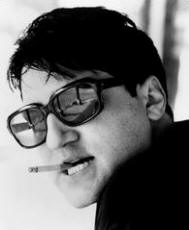 I'm only in the door of Whelan's about 8:45 when Dulli and Co. take to the stage, much to everyone's surprise. The place is pretty much half empty with most expecting a support act. He quickly blazes through a lot of the new album which sounds surprising fresh. It is clear that not many of the crowd (myself included) has heard "Blackberry Belle" but that matters little as there is something about Dulli's performance that is thoroughly captivating.

At a glance, he is a rather anonymous, middle aged man but up on that stage, he prowls around oozing sexual tension, both sleazy and beguiling in equal measures. Through a cloud of cigarette smoke, he is charming the ladies and befriending the gents with his patter. He is funny, cool, a little bit dirty (take note, Ms Aguilera) and more than a touch unstable and dangerous - the type of persona we all gravitate towards but deep down know that prolonged exposure will probably wind you up in hospital or jail or both.
As for the tunes, they all sound fantastic. Whether he is growling his way through songs like "Decatur Street" or whispering a ?la Barry White through Whigs classics like "If I Were Going", it all makes you feel like you stumbled into a back street New Orleans bar during Mardi Gras. It is the type of dark and seedy lounge music to which acts like the Fun Lovin' Criminals can only aspire. There is also a plethora of covers;Fleetwood Mac and a couple of Outkast, who he claims, cheekily, robbed "Hey Ya" from him, a point he illustrated by playing his version of it and then The Whigs "66" straight after. Similar yes, in that they are both great tracks. But the best is his cover of "The Boys are back in Town" - Dulli, a piano, and a dark, bleak rendering of this upbeat classic. It brings the house down.

Dulli calls time having played for over two and a half hours. As the lights come up, there is a giddiness about the crowd, a collective realisation that they have experienced something just a little bit special. On the chorus of "Teenage Wristband", Dulli cackles the question "Do y'want to go for a ride?" We do, Greg, we sure do.