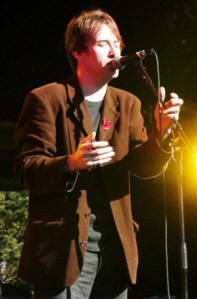 Review Snapshot:
An enthusiastic and cheerful band are greeted by an enthusiastic, dedicated and surprisingly large audience in a strange part of the world...

Full review:
As has been said before, LA is a strange place, a parallel universe. And the most remarkable thing about this parallel universe is that the Trashcan Sinatras are almost as big a band here as they deserve to be.

Their last album Weightlifting (which is worth the cost price alone for 'A Coda' and 'Trouble Sleeping') is a work of maturity, glorious harmonies, and breathtakingly melodic tunes. In short, the album The Thrills are still trying to make. And on reflection, it seems obvious that the west coast of America (and in particular LA) should fall easily for their charms, but it still came as a surprise to eventually stumble across the venue and find it to be reasonably sized (the actual capacity is 750 people), and an even bigger surprise to realise that although the show wasn't sold out, it was comfortably heading that way. Although 750 people mightn't seem particularly large in the scheme of LA, it should be remembered that this is a band that struggles to sell records in their home country.

It would be remiss not to mention that some of the band's more subtle touches were lost due to sound issues, but the quality of the song writing managed to shine through. Most of Weightlifting was played early on in the evening, with the majority of the encore dedicated to older "hits", each of which were enthusiastically greeted and sung along to by the crowd.

With a comfortable dynamic maintained between up-tempo and slow songs, the band left the stage having conquered a small - but important - patch of the world.