2004 seems to be the year of the comeback. The Pixies are wowing audiences across the US and Europe, sounding more brilliantly demented than ever before. The Cure are reportedly about to release their best album in years. Then there's the New York Dolls, back together too, which seems even more miraculous than the reunion of the aforementioned Black Francis and co. In September, the mighty American Music Club will release a new album. But it's the return of Red House Painters (Sun Kil Moon ARE the Red House Painters in all but name) which has made a select few very happy indeed, including Mundy, The Tycho Brahe and the Future Kings Of Spain who are all in attendance tonight. 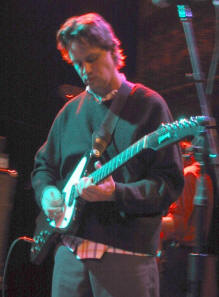 Along with American Music Club, the Red House Painters were the progenitors of a largely overlooked movement during the early to-mid-nineties: the 'new miserabilism'. But 'miserable' is a misnomer. Rather, Kozelek's world-view is one of an unrealised West Coast dream; of crushed ambition and failed relationships. What saves his music from inducing suicide is the incomparable beauty of the music itself and Kozelek's bruised yet far from despairing vocals. It's all in evidence tonight. The songs dusted down from the Painters' heyday: 'Evil', 'All Mixed Up', 'New Jersey' and 'Grace Cathedral Park' sound even more haunted and emotionally fractured than ever before. Live, the songs are augmented beautifully by viola and violin, at once breathing new life into them while making them so exquisitely sad that it's almost unbearable.

Kozelek's songs are so evocative they remind you of a place you've never even been to: California. Thoughts drift through your head: a lonely drive along the Pacific Highway; ghosts of ex-lovers and friends jumping from a San Fran tram, disappearing into the crowd; losing your soul on the Sunset Strip. Kozelek's California is a State of disappointed, troubled souls, not one of relentless sunny optimism à la Thrills.

He throws in two Thin Lizzy covers: 'Jailbreak' and 'Whiskey In The Jar'. Re-appropriated for acoustic guitar and shorn of the metal bombast of the original, they end up sounding as melancholic as Kozelek's own material. For a few moments the audience actually think they are! Songs from the new album segue neatly into the set too, particularly the gorgeous 'Carry Me Ohio', one of the finest things he's done to date. By the end Kozelek even seems to be enjoying himself, resulting in a protracted encore that would have even the most ardent fan checking his/her watch.

Thankfully, this fails to detract from what has gone before: a set of sublime, string-laden, heartbroken songs that you hope to cherish in your head forever.