Meet Stellarband, the band that will soon be challenging The Thrills as the top home-grown talent with a sun-soaked Americanised sound. 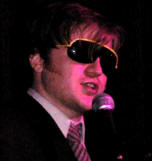 But before we get there, we have to get past the new Luas lines and somehow make our way around to the Sugar Club. The afternoon sunshine is basked upon Stephen's Green and a dilapidated Ford Fiesta is blocking the doorway to the lavish Dublin venue. Inside, the early crowd read silently under a flicker of candlelight whilst stretching out on leather sofas, with a mix of jazz & blues acting as the background music. Steadily more and more people begin to arrive.

Then on stage comes Neosupervital, who appears in a sharp suit with ski goggle-like shades. He holds a futuristic guitar and surrounds himself with a mini keyboard and a beat machine. It is evident from the go that his set will be something quite different. Many of the crowd wonder whether or not this is a joke when songs like 'Rachael', 'Drive' and 'Jazz Fascist' are bound together with incessant dance beats that drown out the simplistic lyrics. 'Sunshine' however, starts to veer towards normality before an injection of experimental sounds brings those ricocheting beats right back. Some songs do impress like 'Nothing' which could easily be mistaken for a Doors b-side, that is until he kick flips off the stage to engage in some robotic Michael Jackson dancing. It's all part of his set and the majority of the crowd lap it up with enthusiastic clapping.

It wasn't long before Stellarband were ready to play to an almost full venue. The chimed keyboards and pleasing melody of 'Sweetness' and 'Stop The Music' warm the crowd right up. It would be the lazy thing to do to keep comparing them to The Thrills but the truth is they have their own recognisable sound. Yes, the lead singer does sound a lot like Conor Deasy and many of their melodies share that same windswept summer vibe, but there the comparisons with The Thrills ends. For songs like the delectable 'Good Stuff' and the musing 'Crop Circles' carry that Stellaband stamp. Feet can be heard tapping and smiles can be seen stretching as Stellarband produce song after song of love-letter honesty and finely-tweaked rhythm.

Neil Young or Brian Wilson would love to claim the authority of 'Go Now', a song with a pleasing momentum that is fine-tuned with a volcanic charm. While the band work well together (including cameo roles of Maeve O'Reilly on violin and Conor O'Donovan on drums), it is the songs that stand out. Whether it be the reggae/pop fusion of 'Wide Awake', the playful 'Player Of The Year' or a song about a man with his limbs on the outside, each song seems to have this wondrous appeal with a velvety magic meandering its way through. The warm and fuzzy imagery of 'Polar Bear' sends a positive vibe throughout the venue.

While Neosupervital threatened to transform the evening into some kind of electro-funk extravaganza, Stellarband proved just why people have whispering about them. With a solid recording behind them they well could be the next big Irish export.