Review of their gig in the Ambassador, Dublin, Oct 2001

Just before Spiritualized took to the stage I was wondering how this band could really play the Big Music. Visible there were four mics, a xylophone, a drum kit, and a set of keyboards. But just as the first bars of "Cop Shoot Cop" kicked in a six piece brass section suddenly loomed behind the band and after that it all made sense. 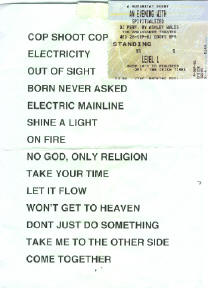 I think Jason Pierce is a genius. Everything he's done up to "Let it all come down" has been dazzling and has made me look at music and the world in a different way-on the new album he simply knuckled down and wrote songs. Whatever about his musical ability he is and will probably always be cadaver-thin and scrawny, he stood stage left, hunched over his guitar, oblivious to all around him. He's a Noughties Van Morrison in his approach to stage work-there was a mumble "thanks" to the audience at the end of the gig, and occasionally there was a glance at plainly terrorised band members.

"Cop Shoot Cop", complete with the usual psychotic wigging out, was gripping-it's a desperately difficult piece to play properly but Spiritualized dug right to the core of its malevolence. It set the tone for the evening. I gathered later that Pierce had assembled a completely new line up for the tour , but this band bled every single note white.

Tracks from the new album were sparse enough, I'm sure there were a few pop pickers there hoping to hear "Baby stop your crying" but it was never a runner. My own feeling is that the new album's "Do it all over again" can make Spiritualized a one hit wonder but searing versions of "Let it flow", "Take your time" and "Come Together" and - most of all - "Won't get to heaven (The State I'm in)" made you realise that there's more-far more-to Spiritualized than that.

The gig of the year so far for this reviewer.