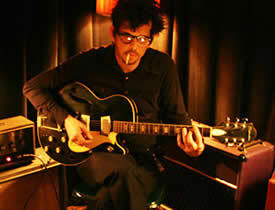 Review Snapshot:
Long absent indie hero Mark Linkous returns after a 4 year absence with a reminder of why he is so loved and why all these bearded guys are here, and smiling, tonight.

Full review:
Sparklehorse returned to Ireland for the first time in 4 years this weekend, and for the man who IS this band, Mark Linkous, it's been a long and sometimes depressing period. Awoken from his self-doubting slumber by the inspiration of Dangermouse's now legendary Grey Album he has released his first full album under the Sparklehorse name in 5 years going ('Dreamt For Light Years In The Belly Of A Mountain', its creation helped in part by the aforementioned Dangermouse).

Tonight, despite looking like a younger version of the current Bob Dylan, he shows no sign that he has the blues, with a sonic mix reflecting the band's album sound and, at times, Mr Linkous' need to smile up at the ceiling and rock out. Maybe it's down to finding himself in a venue more suited to the band's sound than previous venue the Olympia, with that quiet, fragile hush turning into a voice-effect driven, feedback-enhanced wail. Quiet, loud, in-between, but always melodious.

All four of their albums were represented tonight, with earlier Vivadixie.. and Good Morning Spider numbers such as Homecoming Queen, Pig, Saturday, Spirit Ditch and Someday I Will Treat You Good getting the best reaction from a respectful crowd (the least talking I've heard from a Whelan's audience in quite a while). The track 'Someday...', the band's first brush with fame, was here played last of the opening set and the charged guitar and distinctive vocals that conclude the song set the crowd up for 2 encores.

Material from the new album was present, but not dominant, with 'Don't Take My Sunshine Away', a mix of Beatles guitar and Grandaddy electro-effects, immediately establishing itself in the set as a live favourite. The other standout from the new songs, Morning Hollow, hummed and vibrated slowly with beautiful country-tinged guitar and backing vocals from some-time Giant Sand member Paula Jean Brown. The climax of the song, changed for the live show, was the centrepiece of an excellent set and highlighted the yin/yang, sombre/squealing, sound of this band.

As a whole it was great to see this much admired and lauded song-writer up on stage enjoying the ritual of performing live. We got plenty of smiles and one unnecessary "Sorry about that" for the feedback solo at the end of opener Pig. I got the impression that he has a lot more to give, and talk of a forthcoming Dangermouse collaboration (possibly under the name Dangerhorse) will hopefully signal a more productive time for a man quite obviously adored by the crowd here tonight. Have to say though, I prefer the name Dangersparklemousehorse.