America's greatest musical duo returned to Ireland on Saturday night for the first time in over two decades, and by the end of their two-hour set, they left a sell-out crowd at the R.D.S. feelin' groovy. 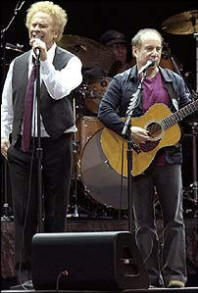 Simon & Garfunkel's 'Old Friends' Tour opened with a series of visual images on the big screens starting with the duo in the sixties, the moon landing, through Simon's 'Graceland' period, the demolishing of the Berlin Wall, Nelson Mandela, the Millenium celebrations and to the present day heralding their arrival on stage.

They opened with 'Old Friends' before upping the tempo with 'Hazy Shade of Winter' and a slower than usual version of 'I Am A Rock'. Art said "It's great to be here in Ireland, in this beautiful Country. This next song is a song about my Country, and a time and place that no longer exists". This led to the beautiful 'America', followed immediately by 'At The Zoo', and 'Baby Driver'.

He introduced 'Kathy's Song' as Paul's most beautiful ballad" while telling the audience about how Paul and himself were buskers in England before fame came along. At the end of the song he commented "It's very easy to sing when the songs are this good".

He was getting comfortable with the Irish fans and he told them about meeting Paul in the high school play Alice In Wonderland. During his speech someone kept shouting at him, to which he quickly responded "sorry we're a duo, not a trio" This brought a great cheer. He went on to say "that this year is the 50th anniversary of their friendship".

Paul took up the story proclaiming "I had the lead role in the play as the White Rabbit, and Art had the supporting role as the Chesire Cat". He mentioned their period as Tom & Jerry "Art was Tom and I was?well it doesn't matter who I was" he added. He went on to say that "we recorded this song called 'Hey Schoolgirl', and they treated us to a chorus or two, a pivotal moment in their recording career.

This paved the way for them to introduce their special guests Don & Phil Everly. They looked really well and quickly ran through a trio of tunes including 'Wake Up Little Susie', 'All I Have to Do Is Dream' and 'Let It Be Me' before Paul & Art returned to join them on 'Bye Bye Love'.

'Scarborough Fair' was followed by a beautiful slowed down, yet extended version of 'Homeward Bound', and 'The Sound of Silence' was also well received.

More video images, this time showing clips of The Graduate were used as an ideal intro to a rousing version of 'Mrs. Robinson'. Paul introduced 'Slip Slidin' Away' as "not been a Simon & Garfunkel song, but it should've been" before launching into the pleasant 'El Condor Pasa' and 'Keep The Customer Satisfied' had young and old alike on their feet.
"I wrote this next song when Art went off to Mexico to film Catch 22. The year was 1969" Paul added, before treating us to 'The Only Living Boy In New York'.

Art introduced 'An American Tune' by saying that "some songs can be written about the future, and this song could easily have been written today". We were then treated to 'My Little Town' and there wasn't a dry eye in the house for the final song of the main set, 'Bridge Over Troubled Waters'.

An encore consisting of 'Cecilia' and 'The Boxer' had the audience eating out of their hands while Art commented "You're the greatest audience in the world" before leaving the stage yet again.

Constant applause brought them back again. Art smiles and says "Thank you for a lifetime of support" and Paul introduced 'The Leaves That Are Green' as "an early song, indeed they're all early songs" he jokes.

And just when you think you're heard every song from their back catalogue, they pull another one out of the bag in the form of 'The 59th Street Bridge Song' (or 'Feelin Groovy' to you and I).

They clench fists, embrace, and spent several minutes waving to the crowd before leaving the stage for the final time, knowing that they've well and truly kept these customers satisfied.