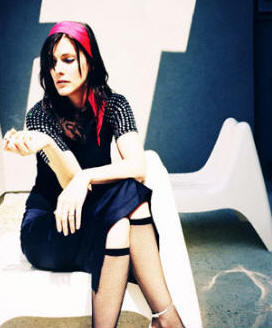 Review Snapshot:
American band Shivaree has been attracting a lot of attention these last few months. From having a song featured on a watch commercial in Italy to record stores in France running out of copies of their latest album, the band are quickly gaining a large fanbase. This midweek performance encapsulated elements of why they are becoming more recognisable.

Full review:
The Sugar Club is an odd venue at times as there is a risk factor involved with going to gigs there. The risks come in the form of arriving either too early or too late. If you are early, you are usually subjected to terrible background music and a dreadful support act. If you arrive late, you usually miss out on one of the comfortable leather sofas and the start of the main performance. So make sure to note that timing of arrival is pivotal to enjoying a gig in the Sugar Club.

On this particular evening, a lot of French and Italian people were in attendance. This could be down to the success the band has had in both countries or that they wanted somewhere comfortable to shelter from the rain outside. The venue looked murky and darker than usual but the small crowd didn't mind as they chatted enthusiastically amongst themselves.

Support on the night came from hippie sisters Jessie & Layla. With tunes like 'Rusty Old Camera' and 'Fine Time', they come across as being the breezy offspring of John Prine and Janis Ian (if you can imagine what their children would be like). Windswept harmonies, sun-soaked melodies and flower-power fuelled punch dominated their set with vocal duties being shared. The pleasant arrangement of 'Freeze It Up' worked nicely and the crowd seemed to appreciate their mellow vibe.

The clock just ticked past 21:30 when a drummer, two guitarists, a keyboard player and a lead female vocalist ambled on stage. It was straight to business with Shivaree as they opened with soft-toned number that made two things immediately apparent: (1) As a band they are a close unit (2) Lead vocalist Ambrosia Parsley is the central axis to which everything revolves around. She has the stage presence of a hushed troubadour with a vocal style that borrows from Neenah Cherry, Joanna Newsom and Tom Waits (in a female-textured type of way). She is the sort of singer who instantly commands an audience's attention and charms them with her likeable personality. Mix that with some really good songs and the audience are like children staring in a toyshop window.

Despite Ms. Parsley being the centre-point of everything, a lot of focus shifts toward her band throughout the set. Danny McGough's keyboards continually hissed and Duke McVinne's guitar coughed up some interesting riffs. The full band participation was moody and aggressive but in a sultry type of way, rather like Rilo Kiley or Alphastates. With a lot of songs from current album 'Who's Got Trouble' quickly exerted, the band had to do something to entertain. 'I need to tell stories, otherwise the set will be too short' claimed Ms. Parsley as she revealed stories of how her grandma hunted down her cheating grandpa with a kitchen knife, and how she and her brother pumped themselves full of Flintstone-shaped vitamins when they were nine.

After at least three encores, the band retreated from view and it gave time to assess the performance: while not quite amazing, Shivaree entertained with tender, effective ballads, jazzy numbers and interesting stories.