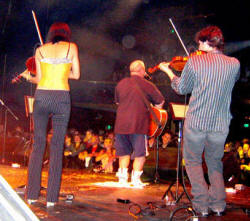 Review Snapshot:
The Section Quartet finished their first full Irish tour with this date in the Sugar Club. Despite going along with some trepidation after being underwhelmed by his previous experience with the group, Cluas.com's Ian Wright found himself highly impressed with their innovative arrangements for a selection of contemporary songs.

Full review:
I always find attending gigs in the Sugar Club to be a somewhat disconcerting experience, it's a converted cinema and retains the red velvet d?or from it's previous incarnation. It seems to me as though it's a disused David Lynch set from a bygone era, the bar even serves cocktails with past their sell by date names like "The Y2K" (Jagermeister, Goldschlager and Cherry Brandy if you're interested) and due to the easy listening oldies that were being played over the PA prior to the performance I'm half expecting the support act to be a tuxedo clad midget singing "My Way" backwards with a bevy of depression-era high kicking show girls joining him on the stage.

This was not my first time experiencing the Section Quartet live, when they played their debut Irish gigs last year I saw their tribute to Radiohead's "OK Computer", I left that show astounded by the ability of the musicians on stage but also with a somewhat sour taste in my mouth. I'm a huge Radiohead fan and kind of saw what the Section were doing as messing with perfection, impressed though I was with their arrangements for "Exit Music (For a Film)" and "Climbing Up The Walls" I felt that playing the album in it's entirety was a bit too much to take and those songs would've been more enjoyable in small doses.

Despite this I enjoyed their readings of the non-Radiohead songs performed that night, their version of Tool's "Undertow" put a song and band that I've never had much time for in a new light and since that night I've come to the conclusion that I'd just been a humourless hardcore fan being a bit too precious about an album that I deeply loved.

This suspicion was confirmed by how much I enjoyed this performance, freed from the constraints of paying tribute to a particular album the Section were able to visit a much more varied selection of styles. Opener "No One Knows" retained the rip-roaring quality that made the Queens Of The Stone Age original so special but was given an ominous feel thanks to the addition of a touch of Bernard Herrmann style violin that conjured up images of Psycho's shower scene. Conversely their take on "The man who sold the world" was much more faithful to the original but without embellishment managed to be one of the highlights of the night.

Apart from that piece however it was the more unusual song choices that most impressed me, Franz Ferdinand's "Take Me Out" probably drew the largest cheer of the night, Eric Gorfain's note for note matching of Jimmy Page on the brace of Led Zeppelin covers was stunning, "Undertow" was once again very impressive, but the real highlight of the evening for me was their attempt to take on The Clash's "London Calling".

The more obvious song choices were slightly more hit and miss however, the pair of Muse songs played retained the bombast that make them sound so utterly overblown and pretentious when performed by a guitar band but when arranged for a string quartet worked really well. On the other hand I felt that their attempt to tackle "Grace" added little to the song and only served to make me pine for Jeff Buckley's vocals.

The performance was interspersed with a number of guest vocalists throughout the night; Thomas Walsh of openers Pugwash (who neither looks like a midget nor was wearing a tux) performed a song from their upcoming album on which the Section will appear, Dave Couse performed a version of A House's "Endless Art" with updates lyrics and Bell X1's Paul Noonan, with trademark crappy looking Spanish guitar in hand ("Sure 'twas far from a string quartet that it was raised"), performed "Next To You".

The set also consisted of a number of Radiohead songs and, as I had suspected, when heard as part of a more varied collection of songs I was able to enjoy them much more and appreciate what the group was doing with them, the pick of the 4 songs played being a wonderful arrangement of Kid A's "Motion Picture Soundtrack" which closed the set.