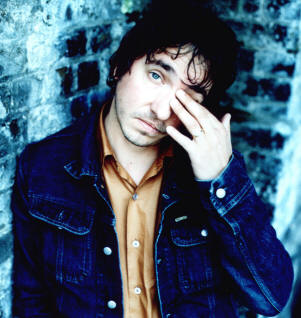 Review Snapshot:
A superb gig at the newly refurbished Camden palace by Richard Hawley, formerly a bits and pieces session man now a singer/songwriter on the top of his game

Full review:
It's a cold and crummy November Wednesday evening in London, I'm resigned to staying later tonight in a converted morgue of a hotel, and the licensing laws here makes me wonder how anyone could come up with the term "swinging London". I'm alone and miserable and I'm missing my wife and child. A grumpy cabbie leaves me outside the Koko club in Camden town, I skip across the road and as I skate past security I hear the huge but embracing sound of Hawley and his band in the middle of "Coles Corner", the title track on his fantastic new album.

His latest work is a superb collection, definitely one of the albums of this and quite a few other years, and it more than makes up the lost ground conceded by the rather forced "Lowedges", his stab at the mainstream market. "Lowedges" didn't crack the deal for him and in a sense I'm glad - he's too good to be gurning it up on kids' pap like CD:UK or to be wasting his life away getting made up for appearances on breakfast TV.

"Coles Corner's" songs are an improvement on "Lowedges", more organic in tone and a lot more heartfelt and down home. Thing is, nothing prepares me for how good this album comes across live. Granted, Club Koko is well appointed, the sound is top notch and these punters are switched on and attentive but tonight I'm riveted by his voice dredging every last drop of feeling from the new album and highlights from the past.

That voice - what a sound: a mixture of gruff charm, regret, romance, elegance and pure rough-hewn warmth. And that's just for starters. He more or less plays the album in its entirety and every note of it works. It's a dark piece , even for him - "Tonight" in particular is a real gut wrencher, the sound of a man struggling desperately for his sanity, and a pall falls over the audience when he introduces "Hotel room" as a song about addiction, with its swinging chorus of "here in my arms". At one point in proceedings he even sings "Happy Birthday" to his road manager, even then he manages to make the melody sound like it's full of yearning and sadness.

But it's not all tears before bedtime. Even though the songs are bluesy in tone and often quite mournful Hawley himself is hysterically funny, a superb frontman. Between numbers he'll produce a stream of one liners but it's pure blue collar wit rather than pre rehearsed patter. At one stage he introduces Lowedges' "Motorcycle Song", a lovesong to his bike now lying in pieces in his back garden, "my bike has a broken heart, it'll ride no more". A sympathetic "Aaah" rises up from the pit but he shoots back "it's only a f**kin bike". There are digs at London audiences, anecdotes about his beloved Sheffield, a hilarious introduction to the sublime "Something is" and some salty comments about Madonna (she'd played the night before in Koko). It's all good natured stuff that somehow sets the songs in even better relief.

Hawley finishes the evening with a swinging cover of "It's alright mama". He's enjoying it and the crowd are too , and it's pure unvarnished pleasure. Hawley is as you find him, his songs are old fashioned, his stylings are hackneyed, the Hawaiian guitar fills are cornball, but he loves his songs, he loves his audiences and, unlike far too many these days he's driven purely by musical rather than market considerations.

Treasure him, I know I do.