REM live in The Olympia, Dublin (3rd of 5 nights) 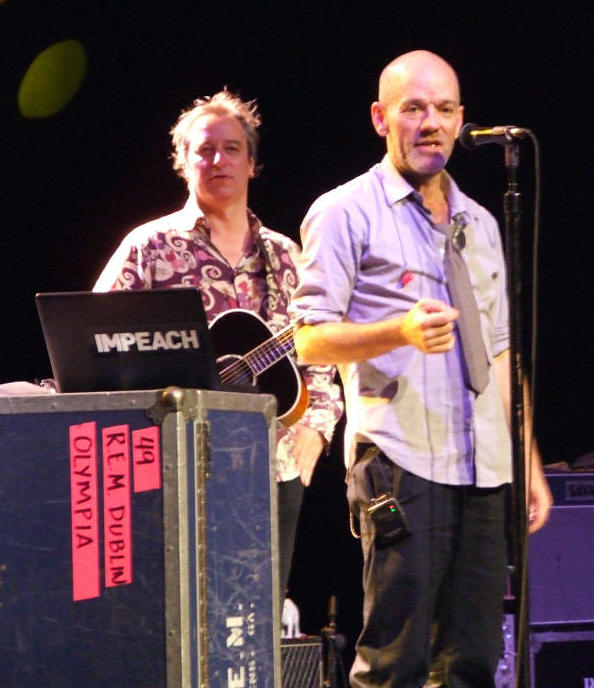 Full review:
When Glen Crowe scored those two goals that sent the mighty Bohemians into the last eight of the Eircom League Cup at the expense of the hapless and penniless Shelbourne, little did he know that in doing so he was presenting little old me with one big old dilemma. Namely, how to perfect the art of bilocation in the two months before a meeting with Cork City in the next round of the competition. Friends, I was torn. The Big Club versus The Langers at Dalymount Park or REM on the third of their five nights at The Olympia Theatre. I placed ads in freesheet newspapers and made impassioned pleas on internet forums. I rang suspicious gentlemen in Dublin ticket agencies. I sent more text messages than my thumbs could handle. "Who can swap two seated tickets for two for any other night?" The answer? Nobody.

And so, on the evening of July 3rd, I wander on up to Dalymount, pay my money and settle down to watch the first half hour before heading to the gig. We are two up inside twenty minutes but the Corkies have pulled one back by the time I leave ten minutes later. It's a cracking game of football and I am sorely tempted to stay. REM aren't even all that good anymore, right?

REM are sensational. Bounding on stage with all the energy and enthusiasm of a litter of puppy dogs let loose in a tennis ball factory, the band take their positions in front of a projection which reads "This is not a show". These performances have been billed as "Working Rehearsals", a chance for the band to roadtest new material in front of a live audience and the non-show certainly does have a touch of the ramshackle about it. Stipe, side on to the audience, reads the lyrics from a disobedient laptop through a haze of persistent error messages for example and many of the ten or eleven new songs are preceded by short whispered discussions between band members.

"We are REM and this is what we do when you're not looking" says Stipe and we are away. The set opener, a new song during which Michael repeatedly bellows something about bringing a horse to water, is frantic, urgent and brilliant. Bill Rieflin drums as if he's sellotaped pictures of the person he hates most in the world to his kit and, while Mike Mills sprinkles sugar coated harmonies over the top, the guitars of Peter Buck and Scott McCaughey crunch louder than a walk in the snow while eating cornflakes. It's just like old times. And then, two songs later, it really is old times when "Auctioneer", in all its marvellous, clatter filled glory bursts into the room like a police raid. Delirium ensues, not least in Row G, Seat 25 of the circle.

Thus is the pattern for the night established. A couple of new songs, a couple of oldies and shiny happy old me putting in a prize winning performance in the dancing while sitting down world championships. The least successful new song, during which Buck plays the biggest acoustic guitar you've ever seen while Mills moves to keyboards and McCaughey takes over bass playing duties, is a very close relative of "Try not to breathe" from "Automatic For The People". Everything else we don't know, though, is pretty much flawless, a raucous, breathtaking hybrid of the best bits from Reckoning and Monster.

But it is the choice of material from REM's amazing back catalogue that provokes the waves of feel good hormones that are still with me two days later. "Driver 8" is as wonderful as we remember it, "Kohoutek" weird and beautiful but it is the distinctive intro to "Feeling Gravity's Pull" that produces the night's biggest roar.

The encore, which arrives all too soon, is closer to perfection than this cynical old geezer could ever have thought possible. "Second Guessing", "1,000,000" and "Little America" shake the grand old building to its foundations and, after an oldish new song called "I'm gonna DJ", the Olympia spits us out onto the rainy streets where my mates, much more used to watching me sigh heavily, look at my watch every five minutes and refuse to applaud at shows, laugh themselves sick at the sight of the mad eyed, blabber-mouthed lunatic that the 90 minutes we've just seen have turned me into.

Meanwhile, across town, the game ends with the score at two goals each but good old Dessie pops up with a last minute goal in extra time to send Bohemians into the semi finals and the crowd into convulsions of ecstasy. A wonderful ending to what, by all accounts, was a great game. But do I care about having missed out on the opportunity to do my delirious Ian Curtis impression when that 120th minute header hit the back of the net? Not in the slightest.

Because tonight, in Dublin City, Ireland, a small theatre just up the road from Trinity College was the only place to be.