For the uninitiated, Push were among the front-runners of the Acid jazz scene all those years ago... a certain Mr. J. Kay would seem to owe them one. 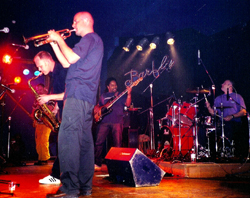 Their particular brand of powerful jazz-funk has been delighting worldwide audiences for over fourteen years, and they've still got what it takes to drive the mob wild. The stage in the Spiegeltent marquee, set up on Highbury Fields for the festival, was almost too small for the band (well there are EIGHT of them...). In the end, however, it added to the party atmosphere, with trumpeter and saxophonist swapping places, going up and down from the stage as solos dictated.

They started with a slick set of instrumentals; swish and sassy, leaving no room for doubters to their class. The rhythm section of Crispin Taylor (drums) and Ernie McKone (bass) underpins the whole of the Push sound; and allows free rein for Jacko Peake (sax) and Damon Brown (trumpet) to pick out an excellent groove or two. Add to this the Santana-esque Mark Vandergucht on guitar, Connor on percussion and Cyril on keyboards, and you have the heady brew that is Push. 'Wait a minute', I hear you cry, 'that make seven and you said there were eight?!'. Yip. After four numbers James Redfield finally got up to sing. His voice becomes another instrument in the Push orchestra, alternating from Scat singing to soul smoothie from tune to tune. Occasionally his banter gets the better of him, but you can forgive a bloke for getting enthusiastic.

The audience - albeit a bit partisan maybe - loved them. They could have danced all night, as the song goes. But that goes for old hands and first timers - everyone has a good time when Push are up there. Even the waitresses were dancing, for God's sake - it was that sort of summer night.

The only gripe was the marquee was strictly non-smoking, which is a real sod when you want to enjoy the band. C'est la vie. If you're lucky enough to have them come to your town, check them out. They smoke so you don't have to.