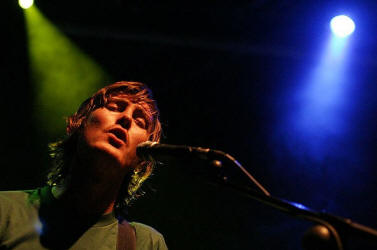 Review Snapshot:
A feast of melodic rock from two of Dublin's rising bands

Full review:
For a Saturday night, Whelan's seemed pretty empty. It could just have been a bad turnout or maybe the crowds have been rapidly decreasing in this popular Dublin venue over the last few months. With the newBen Harper & Blind Boys of Alabama CD creating a hushed atmosphere for the early crowd, it didn't look like it was going to be the rock-fuelled night that Polar had promised.

Support on the night came from the ever-illustrious 66E. With some mid-tempo Radiohead rock, a now larger crowd drifted out of the shadows and towards the stage. Some of the tunes that the band unleashed were so close to dirges that Tim Burton would have a whole soundtrack at his disposal. In contrast to that, songs like 'Nine Flights Down Stairs', 'Scrambled Pictures', 'Traffic' and the excellent 'We Are Home' revealed just how good this band can be. Fusing together drums, keyboards, guitars and the haunting vocals of lead singer Ed, the 66E are the finest atmospheric rock with a grungy twist act on the rise.

Just before the main act takes to the stage, they are spotted in a pre-gig huddle. Clearly motivated their show began and pretty soon some slick guitar combos and pounding drums on 'Music To Cross The Road To' and 'They Had Names' had the seismograph working overtime. The sound Polar possess is indie rock not too dissimilar from Halite and Snow Patrol topped off with vocals that sound like a rusty concoction of Paul Noonan and James Walsh. By the time 'Headstart' finishes, it is evident how much the band relies on the intricate yet palpitating guitar playing by Mick. He doesn't carry the band but he certainly does stand out.

The lights dipped with the tone of the music. The restless feet from the audience began to tap in conjunction with the beat. The night had come alive.

Even though Polar produce some cracking tunes, many of them seem incomplete. Lyrically, a lot of the songs are very average. It isn't until 'Health & Safety', halfway through the set, that the crowd are feasted to a song that can be considered the finished article. Unfortunately following this was a distasteful serving of sleepy melodic rock missing a melody and some decent lyrics. Thankfully, the songs soon improved and the band delivered them with pugnacious drumming, wandering guitar licks, riveting keyboard playing and certifiable singing. The crowd expressed their gratitude by lending their voices to 'South' and closing tune 'Paper'.

As the house lights came back on to reveal a now packed venue, a degree of satisfaction buzzed throughout. The 66E had warmed things up and, even though it took them a while, Polar wrapped the set up nicely. These two bands can only get better.