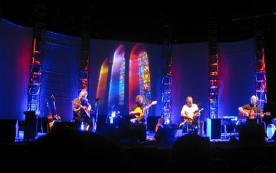 Review Snapshot:
A reunion concert sceptic is blown away by Ireland's trad supergroup.

Full review:
Short of The Smiths burying the hatchet anywhere other than firmly in between their respective shoulder blades, I generally don't approve of bands reforming and screwing their fans one last time to top up their pensions. More often than not, what ensues is a sub-standard offering - take the recent shambolic Pogues Christmas karaoke. To put it mildly, I am underwhelmed at the prospect of catching Planxty, the privilege of which is costing me 65 euro (including the outrageous Ticketmaster charges?deep breaths, deep breaths). Still I have promised an exiled friend home for the holidays, so it is off to the Point with me.

As a general rule, I have a fondness for all genres of music, but as with jazz and blues, I usually enjoy trad for about fifteen minutes before I grow weary. As Planxty take to the stage, the crowd of a couple of thousand is attentive tothe Point of being able to hear a pin drop - a complete atmosphere bypass, so all of the omens for an enjoyable night are bad. And then the music starts. The first thing of note is that the sound is absolute perfection, probably the best I've heard at a gig; precisely balanced, particularly in ensuring that Liam O'Flynn's pipes do not drown out the delicate string playing. Christy Moore takes us through instant crowd pleasers of 'The Good Ship Kangaroo' and 'Little Musgrave' with Donal Lunney and Andy Irvine's intricate mandolin and bouzouki complimenting each other beautifully. O'Flynn chips in with some excellent pipe and tin whistle and Christy is at his understated best, clearly relishing not being the centre of attention.

The first real show stopper of the night is O'Flynn's rendition of the 'Dark and Slender Boy', an air that showcases the power and depth of harmonies a master player can extract from the pipes. As the songs roll on, you can only sit there and appreciate that you are listening to four musicians who if anything have only got better as time has passed. The fragility the years have brought to Irvine's voice only adds to the charm. The tunes are timeless and their execution exemplary.

At the close, the Planxty standards of 'The West Coast of Clare' and 'Raggle Taggle Gypsy Rose' bring the house down - two hours have passed in the blink of an eye. It has been thoroughly captivating. The encore includes Andy Irvine's recently penned 'O'Donoghues' a reminiscence on their heyday when you couldn't get arrested for playing this sort of music. I can only take it all back. Planxty have been worth every penny. They are masters of their craft and who could begrudge them their day in the sun having each spent thirty years championing this music.