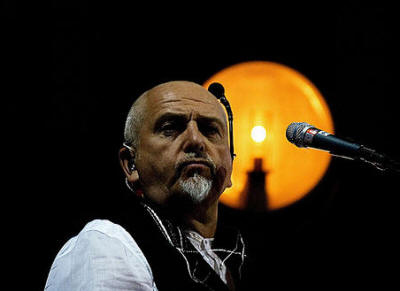 Full review:
Sometimes, just sometimes, you go to a gig that you'll remember for the rest of your life. For me, the Crowded House / Peter Gabriel double header at Marlay Park was one of those. It seemed like an odd pairing to me when I first heard it announced - although I'm a big fan of both acts, it didn't seem to me that they had anything in common in terms of their musical styles. I also felt a bit miffed that the House, who had a pretty big following back in the day, weren't headlining.

The appalling weather in the week preceding the gig didn't bode well for the event. Myself and my friend arrived at the site shortly after the gates opened (oddly, all the security seemed to be provided by An Garda Siochana rather than the usual private security mutts) and had time for a leisurely stroll around the usual array of ludicrously overpriced food stands, t-shirt tents, and the other assorted tat designed to part us from our hard earned.

The singer from Starsailor ambled onstage to tell us that the rest of the band had been delayed but were on the way, whereupon he launched into "Alcoholic." It was at this point that the first few ominous drops of rain started to appear. Those few drops rapidly turned into a torrential downpour which lasted all the way through Starsailor's set, the missing band members having duly arrived. Not being a big fan of Starsailor I can say little about their performance except to say that I won't be running out to buy their back catalogue any time soon.

I'm a huge Crowded House fan and was delighted with the news that they had reformed. Unlike a lot of other "take the money and run" reformations, the House are also bringing out a new album and the songs they played during their set showed that the new material will be of the same high standard as their old work. They started the gig with "Locked Out", a great opener with lots of energy. They then went into "Weather with You", which was the cue for the first big crowd singalong?.which, I'm proud to say, I had a hand in starting. Miraculously, the rain stopped at this point and didn't come back for the remainder of the night. Yet more proof of my often voiced theory that God loves rock 'n roll (though the sodden hordes at Glastonbury may disagree).

The remainder of the House's set was an excellent mixture of well chosen old favourites and new songs. Distant Sun was a particular highlight along with Private Universe and the beautiful Fall At Your Feet. Crowded House are a masterful live act who really know how to play to a crowd, at one point offering us a choice of two songs and then playing the one which got the most show of hands (World Where You Live). Their set ended with "Don't Dream It's Over" by which time my throat was raw from singing along. A masterful set from an excellent band.

Next up was Peter Gabriel who also delivered a brilliant set with many of the songs taken from his classic third album (for reasons best known to himself, all three of Gabriel's first three solo albums are titled simply Peter Gabriel. Thanks for that Peter). Highlights here were No Self Control, Intruder, Not One of Us, and the beautiful Family Snapshot. Solsbury Hill was another masterful song which got a great response from the crowd. Gabriel himself was in playful mood, at various times leading band members around the stage in a conga line reminiscent of Bruce Springsteen's performances. We were also treated to the shameless crowd pleaser of Sledgehammer. Although I'd come mainly to see Crowded House, I hugely enjoyed Gabriel's set too and left Marlay Park soaked but happy. Here's hoping that the rest of the summer concert season lives up to this standard.