I was lucky enough to see Pearl Jam twice in June: in Irvine, Ca. and in San Diego a couple of nights later. It hit me that this is how you get to understand what they are on about, by seeing more than one show. They have a special arrangement going on with their fans. With most "big acts" these days, you are lucky to get any tickets, have to sell your car to afford them, and that one show is the big experience that must last years, until the next tour (where you might be blessed enough to score outrageously priced tickets again). 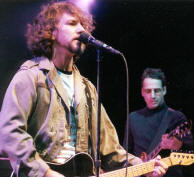 It's different with these guys. The bargain with their very loyal audience is this: "Come to lots of our shows, we'll give you a 2 - hour scoop of what we've got, and a mostly different 2 - hour scoop next time (we've got 30 more hours to give). So that you can do this, we'll charge a third of the usual price, and cut back on the smoke bombs and laser beams (and obscene profit)."

That's what these shows were like, maybe 70% different stuff each night, not just rehashing what you heard at the last show. I talked to a guy (a grown up with 5 kids and a job) who was seeing them twice in Irvine, then San Diego, Las Vegas, and Phoenix. This is routine for their fans.

This egalitarian thing is very refreshing from a major Pop force like Pearl Jam. It's like "The Old Days" in clubs in LA, where the guy you were talking to at the bar would excuse himself to walk up on to the stage and present his art to the rest of us. This connection between artist and audience is the Punk spirit, which Pearl Jam truly exemplifies.

From the stage in San Diego (where he lived for a time) Eddie Veder reminisced about the many shows that he had seen in that arena, "Usually up there in 18C" in the nosebleed section- Bowie, Ted Nugent, Kiss (yikes). These guys are very much part of their community, and amazingly lacking in ego. The S.D. show started with Vedder playing the opening notes of "Better Man" to a roar from the crowd. When it came time for him to sing, he said, "You take it?" and backed away, and the crowd sang the first verse and chorus on it's own. He came in on the second verse, half way through the song. This happens all the time in rock shows, but I had never seen a show start that way and it was stunningly dramatic. The audience comes first. The faith that this band and this audience have in each other is a hopeful thing.

Another example of their lack of "free market" greed is the program they have of selling mastered "bootlegs" of every show that they do, for $15. Get yours here: www.pearljambootlegs.com. You can pick the set that you like. There are gems like Vedder and his ukulele doing P. Townsend's "Blue, Red and Grey", and the whole band roaring through Credence Clearwater's "Fortunate Son".

These guys are not only the obvious heirs to The Who, but also to Muddy Waters' Chicago band; they have layer upon layer of history and future in their music, from Delta and Chicago blues to 60's jams to Punk to an activist's future of hope and involvement. They always challenge their audience. In very conservative Orange County, Ca. they kept hitting at the crowd's conscience; they played The Clash's "Know Your Rights" in response to the recent US Federal Communications Commission decision allowing yet more monopoly in broadcasting, and "Fortunate Son" and "Bu$hleaguer" to the crowd of young Orange County Republicans. There must have been some squirming in seats. They do their job beautifully, with loads of integrity.

If Pearl Jam comes around, go see this show (as many times as you can).