Opening with A-Tired Teenage Riot, who unfortunately incited the crowd into nothing more than a couple of yawns and a headache, it was with relief and amazement that Trent and his terror-troup (NIN) took to the stage. In full-industrial fashion, like four raging pillars of fierce hatred they stood, rock guitars, goth keyboards and electrifying drums, supporting the legendary little b*****d in the centre who, aided by his deep lyrics and crushed velvet voice, keeps the chaos together. And does he ever. 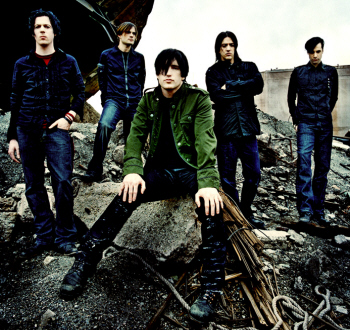 Five years further down the spiral and the legions of fans were definitely blood thirsty for a tour. You could feel the anticipation in the smoke-filled air of the packed-out London auditorium. 'Bow down before the one you serve...' roared the children of the night during 'Head Like A Hole' and you know that in their hearts (or perhaps only on their T-Shirts) echoed the hurt and fear of their chosen Leader of Modern Darkness. Tonight they hungered for his soul... and were not to be disappointed.

The hard hits were all there, March of the Pigs, Sin, Closer, as well as a good selection of their new and more experimental material. Mid-show, taking by surprise the more 'punk' of the audience perhaps, the tone changed from the habitual thrashing mechanics and a 40 ft. projection screen adorned with the most professional visual images of magnified decay (multiplying and squirming) dropped, separating the audience from the band. Thus the mood of NIN's recently released phenomenal album 'The Fragile', was beautifully recreated on stage for a few intermittent songs. Veiled, with just a shadow of light where each ghoulish member of the band was positioned on stage, we were taken on a smoky, ambient trip to the heights of despair and back.

The band have come along way since their debut album 'Pretty Hate Machine' and live is no exception. Although never quite managing to mask his arrogance on stage, Trent Reznor engineers complex musical compositions likening him to a sort of genius within the 'Metal' world. Penetrating the morbid spirit like a guru as opposed to a callused superstar (ignore cheeky Marilyn Manson ref.), his delicate way of making hard music gentle, unleashes (regretfully) the lost infant in many a hard-as-nails rocker... (NIN have a way of making hatred so beautiful and self-loathing so fashionable!). Ending the show with the XXX-generation anthem 'Hurt' they rounded off the aural ordeal on a profoundly sincere note. "This is one of my favourites', Trent told us. And that actually mattered.

Whilst he may be the legendary, misunderstood genius of the musical underworld, what was made apparent at this show is that he could not do it without his polished, extremely talented band. This wasn't Trent & Friends, this was NIN. And what an experience.

Not only for the fans! Convert to the Church of Darkness Now! You Too Can Recall The Pain You Thought You Left Behind In High School!