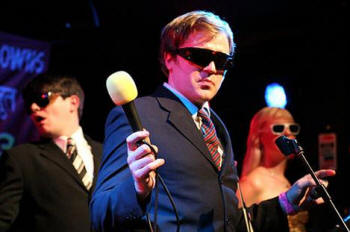 Review Snapshot:
The Irish electro-poppers put on an entertaining show to a full house in the French capital. However, they don't yet have the killer tunes to back up their moves. As for their cool, one Parisian had something to say about that...

Full review:
Halfway through Neosupervital's recent French concert, while they were playing 'P.H.B', a random Parisian punter decided to leave. The problem was, he was at the far right of the stage and the exit was over at the far left, with a full house of punters in between.

So, did our friend push his way through the masses and muss up his new clothes? Not at all. He simply stepped onstage, strolled across behind the band, stepped off the other side and out. It was a breathtaking display of Parisian cool.

Of the Irish band onstage, only a bewildered Dancin Vin saw the stagecrasher. All evening, Vin in suit and shades had been vogue-ing and pulling robotic dance shapes; so far so cool. Then comes our random Frenchman and (literally) upstages him with some real sang froid.

This small cameo summed up the night. Neosupervital certainly are entertaining, and God bless them for being one of the rare Irish acts who aren't precious or over-serious about their art. Tim Vital's material, from opener 'Rachel' to closer 'Now That I've Found It' is a fine attempt at catchy electro-pop - again, all too rare on the Irish scene.

But Neosupervital, as our Parisian stagecrasher showed, just aren't the real thing - not yet, at any rate. As enjoyable as they are live, their songs are lightweight and the band's whole reason for being (their raison d'?re, as they say around these parts) seems to be their stage act of suits, shade and slinky moves.

Their songs feel like an afterthought - which in turn makes their stage act seem like a Spinal Tap parody of electro-pop (calling a song 'Art School Girl' only adds to this feeling). And Neosupervital aren't yet good enough or cool enough to get away with that. For instance: Tim, keep your foot off the monitor!

Neosupervital's futuristic pop is promising enough to suggest that they have a future bright enough to justify wearing shades. However, for the moment they aren't as new, super or vital as they'd like to think they are.