Morcheeba... Beijing. The two words have not traditionally been acquainted with each other. But they came together very cosily at the Yan Club tonight when the British trip hoppers played the Chinese capital as part of the Think UK cultural initiative promoted by the British Council and the UK's embassy in Beijing. 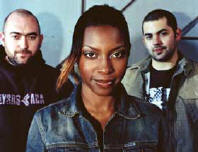 Morcheeba didn't repeat the failure of compatriots Suede, who played a great show to a half-empty Chaoyang Gymnasium in February. To be fair, Brett Anderson's crew were the first major western band into rapidly westernising China. An inept local promotion company has been blamed for the half million pound loss Suede suffered for their efforts. But Morcheeba didn't repeat the mistakes. Both shows, staged at the more compact Yan Club, sold out and a good mix of locals and ex-pats showed up for the gig, to the contentment of the UK-promoting organisers.

Skye Edwards looked more tasty than a five-star dish of Peking Duck as she took the stage in a flowing red Havana-style dress, hair down and curly. Smiling sexily she opened with The Sea, followed by a lovely, drawn-out Friction. It's been a bloody long tour and rumours were that the band was tired. Thankfully little tiredness was in evidence as the Godfrey brothers and Edwards played a consistently crisp and high-charged set. Be Yourself and Public Displays of Affection were particular highpoints before the evening reached majestic heights with Over and Over.

Ross Godfrey's virtuoso guitar might be proof of his big bag of tasteful musical influences. There's no doubt that he's the technical dynamist driving the group. But his brother Paul is owed ultimate credit for setting the band's unmistakable rich, smooth mood. Standing between the two Skye Edwards is a charismatic and sultry vocalist gifted with the dulcet tones of an upscale Apollo cabaret singer. One wonders however if her stage pranks are a little misguided: during the show she repeatedly goads the sternly serious guards, taking a hat from too of them as she stroked the stupefied poor fellow's cheeks and hair. Eventually the security chief ordered his men onto the stage to reclaim the cap and his force's honour. This is China after all, and questioning of authority isn't a tradition. It was great provocative fun to watch for us westerners but the Chinese present were utterly confused, not knowing whether to laugh along or hiss. Some complained, others guffawed.

The largest disapproval of this strange night was however reserved for a Washington native who announced his nationality to the crowd via Edwards' mike. The boos were deafening. The political contexts were unavoidable tonight but the music was sublime. It was left to Rome to draw the curtains on a memorable night. Morcheeba have once again proven themselves a band of distinct sounds and wonderful songs.