I wasn't in the mood for this. I was pissed of at the change of venue. I was pissed off at the price of beer. I was pissed off at the guys behind me. This gig was originally scheduled to take place at the Guinness Storehouse, a prospect that gave me the final shove towards buying a ticket. But Guinness workers are on strike, so Mogwai, their socialist flags flying high, refused to pass the picket, and we quickly found ourselves in the Red Box. Let's not dispute the rights and wrongs of passing a picket, but double standards are creeping in. Allowing sixteen or seventeen pounds to be charged for essentially one band is hardly a cry for the common man. But I digress. The Red Box it was. 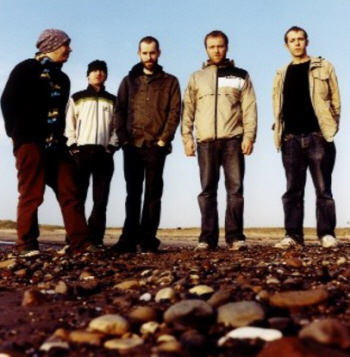 The merchandise stand hit you at the top of the stairs, all 'Blur: Are Shite' t-shirts and thirty quid hoodie sweaters and earplugs. Keep walking... The support act was a guy on his own with his guitar (aw, bless..). I tried listening, and he is probably very good, but his nervousness and constant re-tuning made it difficult to make anything out. He finished and the front half of the (now almost full) venue applaud as he thanked them, while the back section half-turned their heads and applauded as he leaves. A pint of Guinness at the bar comes in a plastic cup and costs £3.10. Maybe it's petty to mention it, but you have to appreciate the irony.

At nine o' clock Mogwai came on and everyone cheered. The stage looked promising, with an obvious platform for a small string section elevated at the back. The crowd was packed in and the lights were pretty impressive. And then there was the band. The cello and the Fender Rhodes and the guitars and the drums, and I was still left unexcited and even more pissed off. They played for about an hour and a half, and everyone ached by the end of it. I was wearing earplugs, but that's not going to make much of a difference when a band is so loud that they cause your throat, your chest, your internal organs, and the world around you, to vibrate and hum. Mogwai have always been known for this. Rumours of their ability to make your ears bleed have always been in circulation. Their ability to bore you with formulaic noise is not so widely publicised.

I'm not going to blanket bomb the whole set with the same criticism, because there wasn't the same disappointment for the whole night. There were moments of genius and of abject clarity, but the rest blends together in a haze of heard-it-before-without-the-pain disinterest. Most people had heard that the new album featured strings, and that these would become part of the live shows over the next while. Through no fault of the band, this information quickly bolstered to rumours of the Glasgow Philharmonic arriving, à la Metallica S&M, for the entirety of the set. Not so. Three violins joined Mogwai for one song. Some guitar noise and some strings. It sounded very nice, but comparisons to albums already recorded were a little too obvious. It's hard to be original these days, especially with music, but I guess some people just try harder than others.

When they finished and left the stage, the applause and calls for more were a little short-lived and noticeably feeble. Mogwai returned quickly, and the encore was probably the strongest (and definitely the loudest) part of the night. There was a breeze from the sound waves and my teeth chattered, but loud just isn't enough. Neither are three violins, and neither is the new album. Maybe I was too pissed off to be entertained or interested, and to be fair, I was pissed off before the band even came on stage. Maybe I'm still too pissed off to be writing an objective review. Or maybe I'm right and the only place Mogwai can still hold its musical head high is in the offices of NME and the major promoters.

Check out an alternative review of the same Mogwai gig complete with the setlist the band used.

Download a free Mogwai track from this page on vitaminic.ie