Review of their gig in Vicar Street, Dublin, 8 March 2005 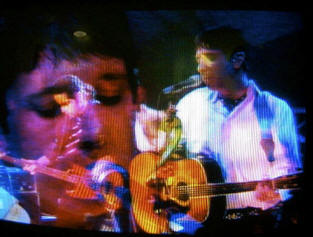 Review Snapshot:
In these days of lo-fi, skinny-tie back to basics, Mercury Rev's expansive and towering brand of space-rock is a welcome tonic. So, how do they cut it live? On the way out, I overhear a girl describe it as 'a religious experience'. She's wrong. It was BETTER than that.

Full review:
There was an article recently in The New Scientist about how it'll all end. It described how the planets would shoot off one by one, as if being sucked away by some monolithic vacuum cleaner. Before that, there would be spectacular meteor showers, cosmic fireworks, black holes collapsing in on themselves. And the half of the planet enjoying daylight would see an encroaching darkness ominously creeping in from the horizon. Rather than take to the motorways in a collective panic like Hollywood scriptwriters think we'll all do, we should just dig out the deckchairs and enjoy the show. What I'm eventually getting at is that Mercury Rev's music would be the perfect accompaniment to all this. It's vaguely doom-laden without being depressing and is yet strangely optimistic, so when the sky starts falling and the sun is imploding, we should just smile and be awestruck at the wonderment of it all. Still, it's nigh on impossible to adequately describe what their music sounds like, to reference it to anything ('prog-rock' is just lazy thinking). To me it sounds like the end of the world. Conversely, it sounds like the dawn of creation too, as if the particles that would constitute the future sound of Mercury Rev were born when the Big Bang went off.

I suppose it was the visuals at Mercury Rev's near transcendental gig at Vicar Street that's got me thinking about all this. Images of strange creatures floating beneath the sea, starry nightscapes, forlorn-looking animals, a woman alone on a beach set the parts of our brains given over to existentialist thinking a mental workout. And if that wasn't enough there were old Sanskrit sayings displayed too, and thought-provoking aphorisms such as 'Time doesn't pass by' and 'Love is a very strong force. Compassion is stronger'. It could all be very naff and pretentious, like this review is turning out to be, but it works because the Rev's music is unknowable, otherworldly, indefinable. They once described themselves as 'this chaotic experimental mess that didn't even want to be a band' which goes some way to explaining their raison d'etre.

On stage, frontman Jonathan Donohue is compelling, a dark vampiric presence until he unleashes that disarming child-like voice. His sense of oneness with the crowd is palpable. To his side Sean 'Grasshopper' Mankowiak's guitar is screaming out skewed, languid melodies atop the dense, layered texture of their songs. Multi-instrumentalist Jeff Mercel underpins things neatly with tinkling piano lines. They sound incredible. A large swathe of tonight's set is lifted from their quite brilliant and slightly more accessible new album The Secret Migration, a return to form of sorts. Secret for a Song, Black Forest (Lorelei), In The Wilderness, In A Funny Way, First Time Mother's Joy (Flying), My Love all sound majestic, exuberant and life affirming. And all this before they launch into Holes, Opus 40 and Goddess On A Hiway from their career defining Deserter's Songs.

One star hangs lonely in the sky, against a backdrop of pure deep black. The band exit stage left, visibly over-awed by the joyous reception from the crowd, on this last night on earth. If the end of the world sounds this good, it's gonna be one hell of a ride.