Before Melt-Banana take to the stage at Dolan's, what sounds like birds chirping comes over the sound system. The chirping may sound somewhat strange, but there is an intrinsic beauty to. This is also something that can be said about Melt-Banana. 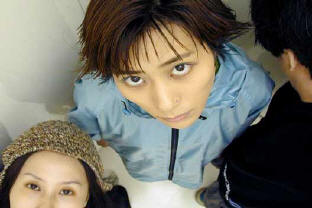 While they've been going since 1991, tonight marks the first visit to Limerick from the Tokyo quartet as part of their current tour to promote their fifth album 'Cell-Scape'. An extremely healthy turn out, plus two very well received support slots from locals Hatch 77 and Giveamanakick, ensure that all is set for what should be one of the AMC shows of the year. Unfortunately, I only caught the end of Hatch 77, who seemed pretty impressive. The next time they are playing, I will definitely get off my arse and stop watching Fr. Ted re-runs on the telly. Giveamanakick launched their usual kamikaze-style attack, with swelling renditions of 'Significock', 'Show Me Your Style', and 'Let God Touch Your Children' providing aural pleasure for the audience.

However, none of this could prepare us for what was next. I personally didn't have a clue of what to expect from Melt-Banana. I was told that ear plugs might come in handy though! Bassist Rika MM straps on a bass that looks like it is probably taller than her diminutive figure, while guitarist Agata is wearing his usual surgical mask. Then vocalist Yasuko O struts on stage and lets out what could be described as something between a yelp and a wail. While she is singing predominantly in English, God only knows what she is on about, but it still sounds magnificent. While there seems to be certain intensity to Melt-Banana's sound, they themselves seem more than willing to engage in niceties with the crowd. When one amadh? suggests that Yasuko take her dress off, she quickly quips that he'll have to come onstage and take off his own clothes first. Meanwhile, Agata unleashes sounds from his guitar that leave jaws dropping all around the shop. Guitarists who are in the crowd are bemused, while the rest of us are just in awe.

Melt-Banana's sonic ferocity balanced with a vigorous rhythm section sculpts a musical ideology that seems beyond comprehension. On paper, it really shouldn't work, but it does with tonight being one of the best shows that this city has seen in eons. You could say it was punk, you could say it was hardcore, you could even say it was the most twisted form of pop music you have ever heard. However, it appears that Melt-Banana just can't be defined for one reason - there is simply nobody else doing the same thing on the planet.