Lots of free tickets made for a good but fairly apathetic crowd for Martin Grech in Whelan's. Coming on amid shrugs and vague murmurings about the soundtrack to some car ad, Grech had his work cut out. And with a mass of Afro hair belying his aura of cool-but-intense shyness, had anybody been giving it any thought, they wouldn't have known what to expect from him. 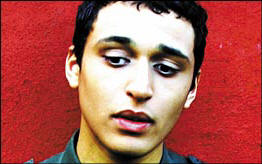 His band provide an interesting backdrop, with impossibly low-slung guitars and black-painted fingernails, and dutifully shuffle offstage for Grech's acoustic set, like good backing bands do. With the exception of the pierced and mohawked drummer, though, they give the impression of generic motley, as if they don't quite know which musical uniform they're supposed to be caricaturing. This is understandable, since while he avoids both the one-dimensional headiness of metal and the self-consciousness of 'alternative', Grech's set incorporates a startling generic schism. With the band, he is intense and melodic rock opera; without, he is pomp-free and disquietingly honest.

While lyrics like 'I get what I deserve/ It's nothing I am worth' tend to fall on the wrong side of tawdry, Grech's voice, especially when only accompanied by an acoustic guitar, is capable of an extraordinary plaintive purity of which Jeff Buckley would be proud. Buckley-ism was saved from its posturings by a remarkable vocal talent; Grech-ism is similarly saved from its adolescent crudities. In the unpretentious setting of Whelan's, which gives no quarter to faults and pretensions, this is especially evident.

Grech seemed to be under a vow of inter-song silence, and broke it I think only once during his set, preferring to win us over, and palpably doing so, by music alone. There is something high-priestly in Martin Grech; a coherent show would give him wider appeal, but when he left Whelan's he had certainly gained a few converts.