It was a warm September evening, the stage was set, candles and incense burned adding to the atmosphere and the Red Room gradually filled up, causing temperatures to rise for this Mark Geary gig. 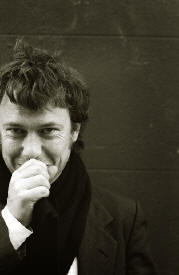 Support for the night was provided by Dubliner Anne O'Donovan, who treated the crowd to some great songs before the man himself arrived. She began with 'Merlot', followed by 'False Bravado' both simple songs talking of love and heartache, with well-written lyrics 'flicked pieces of heart from my sleeve' and memorable melodies. Though nervous she soothed the audience with her strong voice and both 'Fare thee well' and 'Some kind of love story' (inspired by the Arthur Miller play) had the room humming along. With the number of male singer-songwriters in Ireland it's refreshing to see a talented female singer performing her own material.

At about 9.30 she made way for the diminutive Mark Geary, who appeared wearing an army jacket and a big grin. The last time I saw him he was supporting Glen Hansard (of The Frames) in Dolan's Warehouse, where he was somewhat defeated by a noisy crowd. There was no need to worry this time; the crowd built up slowly but remained reverently silent throughout the gig, as people huddled at the back when the front tables were filled. The intimate style of the Red Room suited his harmonies and the sound echoed off the curved, stone walls, creating a perfect haven for music lovers.

Though his latest album '33 1/3 Grand Street' is pretty mellow and laid back, the energy he projected when on stage added so much to the songs and, along with the anecdotal snippets of life experience he shared, ensured the audience was instantly captivated. On 'America' he beamed down as the audience sang the chorus 'I'd wash my hands / if America was bland' back to him. He followed this with the catchy song 'The Only Girl in Town', which he had tried out for the nuns in Mary I, the last time he played Limerick. Next was 'Gingerman' and a new offering 'The Apron Song'. He said it wasn't his fault if other bands wrote great songs before launching into BellX1's 'Next to you'. He dedicated 'It beats me' to his friends The Frames, and then, accompanied by his electric guitar, blasted out a more rocked up 'Suzanne', with the audience echoing back 'Suzanne' over and over. His voice cracked a little as the night wore on and he said he was treating it with honey and vinegar but it just added a truer, bittersweet tinge to the songs.

His stories of his childhood brought about the most smiles from the audience. As one of 10 kids he said it was tough, especially at Christmas, when they would find the Mikado biscuits hidden in the washing machine and eat them all before Christmas morning, thus inspiring the song 'Christmas biscuits'. The audience almost drowned him out with 'you're just a nail on a cross' on 'Ghosts' and when he said 'Volunteer' was his last song the crowd audibly groaned not wanting the night to end.

When he left the stage there were insistent calls for an encore. He performed 'Morphine' before finishing up with 'Adam and Eve'. He left the stage, to rapturous applause, his combination of genuine emotion and humility satisfying fans and converting newcomers. After his years playing the circuit in the States (he was a regular in New York's Sin-? where he played with the legendary Jeff Buckley) it's great to see him doing so well over here in his native Ireland.