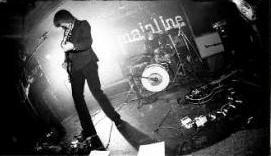 Full review:
It is the start of Spring, even if the weather defies Mother Nature, and at this stage of every year bands sprout up like flowers amongst the weeds. From February onwards, new bands are plugged throughout the media for weeks on end and more established acts release new material & start out on touring duties. So expect to be swamped with interviews/reviews/articles on the hottest new bands (Bloc Party are currently leading the way) and some who might grab your attention (like Mainline) over the next while.

As the venue slowly filled up, it was obvious by some neutral comments muttered that many people were here just on the hype that currently surrounds Mainline. Vague expressions masked the faces of the few who were subjected to the dreadful background music and the non-appearance of a support act. The clock was ticking close to ten when the main act arrived through a hiss of smoke. All of the band members were attired in similar leather jackets and new-age style mullet haircuts. They looked like a gang of biker's kids making a pit stop to refuel and maybe rock out for a little while. Rock quickly became the definitive word though. Amps were cranked to the right and pedals were programmed to a grungy level before a wall of guitars started everything off.

Crammed onto the stage were six twenty somethings ready for battle with four guitars, keyboards and drums as their weapons of choice. A blue tint flickered just as the band opened with a soundtrack of Joy Division-styled cravings. The crowd started to warm to their sound straight away and the band fed off that energy. Rolling straight into the next track, more smoke fizzed out of the shadows thus creating a gloomy atmosphere. That atmosphere was further heightened on songs like 'Bounty' and 'Where The Ghosts Meet' where their sound came across as a large dosage of Black Rebel Motorcycle Club with some added punch.

One of the best things about Mainline is that their sound is very compact and all of the instruments gel well together. The keyboards stutter with a cloudy eeriness, the drums tap like a marcher's signature tune while the guitars dig deep and unveil a rugged intimacy. The lead vocals differ between a morbid Tim Burgess and a Velvet Underground-era Lou Reed, which suit the despondent lyrics.

'Mary Jane' and 'Re-birth' stand out as two of the stronger songs in their set due to a zip of enthusiasm in the vocals compared to previous mumblings on sections of earlier songs. All around the venue, the once expressionless faces now had a satisfied smirk in place.

Despite the lack of crowd interaction, Mainline are really good live performers. Taming a surly rock sound isn't an easy feat. This band do it really well, using the uneasy tone that Hope Of The States exploit so well and the downtrodden rock resolute of Jesus And The Mary Chain. This gig was a good introduction to the band's sound but their rock n' roll style exit (each member leaving the stage one by one dropping their instruments without any acknowledgement to the crowd) didn't do much to impress, and maybe even spoiled their final instrumental piece, which was really good.