The first time I saw Lucas was as a support act to Damien Rice at his Vicar Street date in December 2003 and I pegged them that night as "promising". On the basis of this show at Whelan's I'd have to upgrade that to "potentially very, very good". 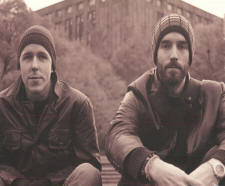 Certainly if this performance is any indication of what they might be capable of it would be fair to say that there are poorer Irish acts then Lucas that are signed to major labels. For that matter there are poorer international bands then Lucas that have million selling albums. Musically, not a million miles away from Radiohead circa The Bends, the Galway 4 piece have a handle on a style that many established Irish acts have failed to grasp and in front man Alan Gray they have a singer whose clear low tenor voice can hit notes that would require other singers to resort to a shrieking falsetto.

Songs such as "Serpiginous" and upcoming single "Snapshot" are definite crowd pleasers, the former being in my opinion one of the best Irish rock songs since "Revelate".

The band was joined on stage briefly by Lisa Hannigan, best known for her work with Damien Rice. Her presence can enhance any song and her contribution on slower songs like "Coming down" definitely gave them a lift. As to whether or not those songs would stand up on their own without her presence is a question that will have to wait for another time.

If the opportunity presents itself, Lucas are definitely well worth the look.