'Loud and Clear' (featuring Jove, Alphastates, 66e and others)

Review of their gig in the Olympia Theatre, Dublin, 19 March 2005 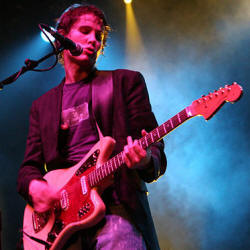 Review Snapshot:
This was the DIY route to mainstream attention for six unsigned Irish acts, where they independently booked one of the country's most distinguished venues and entertained the large numbers who came out in support.

Full review:
Just as the night's sky covered Dublin like a black veil, the streets quickly filled with people eager to witness the end of the St. Patrick's Day Festivities in the form of the colourful Skyfest Fireworks. All traffic was stopped from entering the city centre, crowds lurched along the River Liffey and a small early crowd scuttled into the Olympia Theatre off Dame Street.

Inside the confines of the venue, Jenny Lindfors had just kicked things off. Her engaging vocals fizzed out of the large amps and sucked the audiences' attention away from the bar at the back of the theatre. She has this uncanny ability to reach inside the listener and whisk them away on a graceful voyage of musical enchantment, to which she perfected that skill when she played 'Fading Phase' and 'Play It Away'. With her elegantly simple left-handed guitar strumming and a set-list of compelling songs, she was the perfect opening act.

Karl Vincent next appeared on stage and slipped straight away into a deeply rooted melodic tune. The strings of his semi-acoustic guitar juddered at an almost common singer/songwriter pace while his lyrics brought an extra depth of character to his performance. An odd cover of 'Video Killed The Radio Star' combed over the song's usual playfulness with a lick of seriousness and had sections of the crowd humming along with the infamous chorus. His set was impressive without being anything special.

Stepping up from the singer/songwriter appetizers, the first part of the main course came in the shape of the Delorentos; an indie rock band who go from strength to strength with every live performance. From the opening chords of 'Senses' it became apparent that they could easily slide in beside the current wave of guitar-driven bands that are lapping up much of the mainstream media scrutiny. With a tight sound consisting of punching drum beats, Strokes-esque guitars, duel singing responsibilities and a fidgety song structure that won't allow the music to be pegged down with comparisons, they created a thumping atmosphere with renditions of 'Belgium', 'Any Other Way' and the excellent closer 'Love'. The lights dimmed, the audience wiped sweat from their brows, the roadies pounced like sprinters off the blocks, the sound technician smiled and the band departed to a chorus of enthusiastic roars.

Dust fell like snowflakes from the hanging curtain above the stage as the 66e set up their equipment. With their debut album 'Fall Down Seven Times Stand Up Eight' drawing more of a fan base over the last two months, it was clear that a large proportion of the now packed crowd were present to catch this band. 'Scrambled Pictures' and '66e Are Home' swooned with delicateness, and while sections of the crowd howled with delight, it was clear that the band were not at their tragic best. Their eerie off-key sound simply did not make a huge impact and in turn did not justify the talent of this excellent band.

Catherine Dowling's red tights & white boots gleamed from the shadows as Alphastates began with their blend of sugary indie pop. Although the poor sound quality that dogged the 66e's set helped to restrict the band from reaching their best on the night. The vocals came across as muffled and grungy, which certainly didn't suit the band's overall sound. 'Sometimes' did add a little character but even the smoke machine couldn't hide the fact that the sound quality wasn't up to scratch on their usually addictive tunes.

The majority of the 928 people in attendance let out a collective roar when the main act Jove took to the stage. Fronting a contemporary mask of epic rock, the band has many songs of powerful ambience ('Aberdeen') and stirring claustrophobia ('February'). A string section of violins and cello was a nice touch and would suit the band's sound on future outings if they were to include them. Behind the pumped-up front man Paul Walsh was a core of musicians who all contributed to forming a solid sound; this solidarity is why the band are so good at what they do. Within that core are sweeping guitars, raging drums, a shrewish bass and intrinsic keyboards, that all combine to perfect the band's formula that will surely reach larger audiences. Even the people in the crowd who wouldn't be big fans of their sound admitted to being thoroughly impressed by the show put on by a band on the rise.

Radio DJ Alison Curtis hosted the evening without ever really interacting with the crowd. That interaction was left to the music of the six acts on offer. And each of the acts proved not only how healthy the unsigned scene is (despite some sound difficulties) but also how adaptable they all are to a bigger stage. The 'Loud & Clear' event thus was noted down to be a success (by most of those who attended anyway) and has opened the way for similar events to be organised in the future.