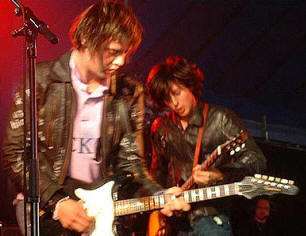 Review Snapshot:
With or without Pete Doherty, The Libertines march on, hitting the US for a sold out tour. The jury is in on the second album. Although it mightn't be a formidable as 'Up The Bracket', it's live where The Libertines shine. Tonight in Boston, they wrecked the gaff.

Full review:
The Paradise Rock Club; we're talking neon signs of palm trees here, bar staff with more tattoos than pale skin, $3 for cans of Millar Extra and a succession of dark corridors that leads you into a room with a stage.

The set up looks pretty formidable: seven, maybe eight guitars, microphones facing towards vintage amps and a crowd that's spilling out of the room's entrance. The gig sold out two weeks in advance.

In the front bar, game five of the World Series playoffs is going into the 4th inning of extra time, as the Boston Red Sox try to overcome 'the curse' of the Yankees (they did, and went on to win their first World Series title since 1918). And as David Ortiz hits a dramatic homerun to end the game, the cheers of sports fans are drowned out by the muffled cheers of Libertine fans in the back venue.

The Libertines step on stage to a backdrop of a new album, endless months of carnivorous tabloid stories, and pumped up gossip splashed all over NME. But here they are, trying to let the music talk, all cool swagger and Hennessy bottles. Bass player, John Hassal announces "we've just been told Boston have won the baseball match" to the roars of an already hyped crowd. Racing through most of their second record 'The Libertines' (whose controversial cover with Pete Doherty's arm outstretched is a less than desirable publicity stunt courtesy of Rough Trade), 'Road To Ruin' stands out, but, to be honest, most of the tracks merge into sweaty, stage revelry. Interim guitarist 'Nick' thrashes about like he's attempting to escape a shark attack, while frontman Carl Barat maintains his cool, despite the perspiration in a 'Rude Boy' t-shirt and leather jacket. Most formidable, as usual, is the real vertebrae of the Libertines live show - drummer Gary Powell who breezes, shirtless, through staggering solos.

Material from 'Up The Bracket' gets a shoe-in, namely the title track which almost literally raises the roof. By this point, the crowd are mosh happy and as the Libertines leave the stage, the screams for more eclipse any baseball celebratory roars. The boys return for a brilliant encore to add to what really was a f*cking great show.

Outside after, Gary Powell is leaning against the tour bus accepting well earned congratulations from anyone who'll offer them. With or without Pete, The Libertines are a band that has the potential to ignite any stage, and they set the Paradise on fire tonight.