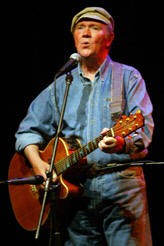 Review Snapshot:
A sometimes raucous, sometimes melancholy, evening in the company of a master of the Irish ballad tradition. As demonstrated this evening, his version of the 'The Parting Glass' should be required listening for anyone who loves Irish folk music.

Full review:
There's probably a stage at which most performers, by virtue of sheer experience and longevity, shift from being a performer to a legend.

69 years old, with half a century of singing and acting behind him, it's fair to say that Liam Clancy has paid his dues.

Tonight his performance to a packed Mullingar Arts Centre leaves one in little doubt as to his continued enthusiasm for the stage, after 50 years of performances.

The audience are treated, in true troubadour style, to a performance that ranges from recitations of Yeats' poetry, through Newfoundland whaling shanties, to spoken word elegies and, of course, the balladry he, his late brothers, and Tommy Makem made famous in the early 60s.

And stories too. Clancy is nothing if not a talker, and his yarns are worth the admission alone.

There are few performers who can recount the tale of a fresh-faced Bob Dylan eagerly stopping them in the street to play them a new song he wrote ("I took the tune from The Patriot Game," the young folksinger gushed).

Or, half naked, sharing a flea-ridden room in a Kilkenny 'louse house' with 12 snoring, drunk labourer 'monsters'.

Or, more pleasantly, a jug of hot whiskey with Ewan MacColl. Or swapping addresses with Johnny Cash and Willie Nelson prior to a show at Madison Square Garden ("'Johnny Cash, Cash House, Hendersonville, Tennessee' - he said. 'Liam Clancy, Ring, Waterford' - I told him").

The songs that follow, peppering the stories, range from 1950s folk standards (MacColl's 'Freeborn Man of the Travelling People') to the old ballad staples (don't forget - this guy was singing 'The Irish Rover' while the Dubliners were still sober teenagers).

While the material is mostly sweet or humorous, at times the show is infused with a heartbreaking melancholy, a very real sense of sadness on the part of Clancy, who now clearly sees himself, in terms of his generation, as a last man standing.

It comes by way of a spoken elegy to late Dubliner Luke Kelly. Whilst recounting his memory of 'Lukie', Clancy also recalls "my own brothers Paddy, Tom and Bobby", and conjures up memories of old, black and white nights of singing, acting and carousing.

These are the ghosts that linger behind Liam Clancy, and suddenly the stage seemed very lonely.

But a raucous (is there any other?) 'Wild Rover' lifts matters to the close, before Clancy returns, with a lone concertina accompaniment, for a beautiful rendition of 'The Parting Glass'.

Often hackneyed and poorly-served by lesser singers over the years (including Dylan's noted reworking 'Restless Farewell') this was a song finally brought home.

It was impossible not to be moved as a 70 year, yet ageless tenor caressed the last lines:

To echo Mr Dylan's own words - Liam Clancy is the best ballad singer I have ever heard.