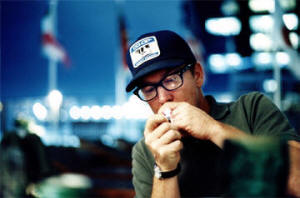 Review Snapshot:
For their second Irish visit in a row, Lambchop won't come come to Dublin, so Dublin has to go to Lambchop. And we kind of wish we hadn't bothered.

Full review:
The last time I saw Lambchop, in a peculiar little venue in Wexford, where the tiny stage had to be temporarily and precariously extended with tables so that all the band members could comfortably fit, we watched in amusement as the barman fielded a series of calls from his regular customers, all of whom wanted to know what the band with the funny name whose ad they'd just seen in the local paper sounded like. "A bit of everything" he kept saying, "A bit of everything". It's as good a description as any.

Later that night in Wexford, the band played a magnificent set, mixing songs that pricked at the tearducts with their spare, bruised beauty with moments of pure pop bopaliciousness. My God, some of it was even anthemic. We spend a good portion of the night dancing like it's 1989.

Two years later I am in Galway, balloon animal making capital of Ireland, if not the world. Galway is a great place, with an atmosphere all of its own, its cobbled streets an ideal home for those who are involved in its principal industries of face painting and wanting to be Marcel Marceau. The Galway Branch of the support group for unemployed jugglers has a membership of zero. It's my kind of town.

On the drive from Dublin, with the sunlight hurting my eyes, I am playing Lambchop at much louder volumes than my stuck at home missus would allow. At Rochfortbridge, just at the place where the world's most incongruously sited strip club used to be, the blissed out pairing of "You Masculine You" and "Up with People" fade into the distance, leaving behind a calling card that bears the message, "You've been goosebumped". At this point, despite the heat, my arms are looking like a couple of chameleons who've got lost in the frozen chicken section of the local supermarket. It goes without saying. I am looking forward to this.

The venue is rather posh it must be said, far too swanky for the likes of us. My date for the evening, Dr Ron - PhD, is ill at ease in the plush surroundings, being a typical student type who lives in a flat which I have no doubt will someday grace the cover of whatever the industry magazine for environmental health officers is called. In the ballroom, which is served by toilets where fresh flowers poke out of thin necked pewter vases, a man in a tuxedo is serving hotdogs. Whelan's it ain't.

Lambchop appear. Is there any other band who, on taking the stage, have audience members doing a quick headcount? Tonight Lambchop number seven, and four of those, including mainman Kurt Wagner, remain seated throughout.Wayne Coyne impressions are clearly not on the agenda. Neither, it seems, is playing anything where second gear is required. If they had a drum machine, it could have been set to "Funereal" at the start of the show and left there throughout. We want some grandstanding, goddammit! We want to tap our toes! This never happens.

The new album, "Damaged" has been universally well received, and tonight's opening track, "Paperback Bible" has been the subject of particularly effusive praise, but to these cranky old man ears, its impact can best be described by reference to that most marvellous adjective, "meh". After a couple of minutes of random string plucking Wagner starts to sing. It's a list song, and list songs are almost always great, but while the lyrics are admittedly wonderful, the music, at least on first listen, is repetitive and uninspired. Four of the first six songs are brand new and all sound the same, like a lo-fi version of one of those Stars on 45 medleys that you're probably too young to remember.

Occasionally, but only occasionally, as on the marvellous "The New Cobweb Summer", things look up momentarily. As the song reaches its wigged out conclusion in a blizzard of alt country feedback, his bottom making only intermittent contact with its chair, Kurt lets rip with a dumptruck full of gravel voiced jibber jabber. It's a tantalising, frustrating glimpse of what this band can do. But normal service is resumed soon after, Wagner refusing point blank to entertain requests for the upbeat "Up with People". The set is made up almost entirely of songs from "Is a Woman", an album which is broadly considered their bleakest, and the as yet unreleased "Damaged" which, by all accounts, makes "Is a Woman" sound like The Frank and Walters.

Of the new songs, only the set closing "The Decline of Country and Western Civilisation" doesn't rely on the template that goes, gentle strumming - understated vocal delivery - slight increase in volume - end. Not that there is anything wrong with that template - I love all the songs that I'm familiar with that make use of it. It's just that I don't want to hear a whole bunch of them one after the other.

After 90 minutes, including a perfunctory, almost begrudging, one song encore, Lambchop take their leave of us. The next morning, loading up the car, the very first thing I see is a bearded man on a bicycle with a guitar strapped to his back and an anorexic greyhound on a lead trotting dutifully behind. Nobody bats an eyelid. What a great city this is. Unlike, on this occasion at least, the band who are my reason for being there.