Kings of Leon at the 'Les Inrocks' festival 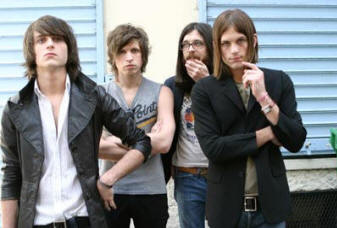 Review Snapshot:
The festival 'Les Inrocks' in Paris, headlined by those young Americans, The Kings of Leon. An Irish fan travels many miles for a disappointing gig...

Full review:
Having made a rather late and somewhat drunken arrival to La Cigale for Les Inrocks festival, I was gutted to find out that Radio 4 had cancelled and would not be playing. The crowd, however, are already in a frenzy - an unusual sight in Paris where the audiences are usually pretty reserved.

Bloc Party take to the stage and things get pretty manic. It would appear the French have just discovered crowd surfing, with grown men scrambling on stage to dive back off it again, bewildering the stage crew who are frantically trying to protect the band. It's a shame really as Bloc Party proceed to play an appalling set of middle of the road art rock crap and deserved more then a threat of invasion from the crowd.

But the French are oblivious to the banality of the tunes and writhe, scream and party like it's 1999. Bless 'em. Singer Kele Oreke sings out of tune for the most part, with some of the worst lyrics I have ever had the misfortune to hear, but you have to admire his immaculate pronunciation. Guitarist Russell looks bored out of his mind, kept consciousness only by the fascinating sight of the stage crew fighting a losing battle with the audience who manage about 15 stage invasions throughout their set. Drummer Matt Tong is the only redeeming feature and looks like he's going to spontaneously combust. He throws himself off the stage at the end of the gig to crowd surf for 10 minutes before Kele asks meekly, "Can we have our drummer back now please?" Rock'n'roll.

After a short interval the Kings of Leon take to the stage. They play an engaging set made up of new and old material. The new songs fit in seamlessly and have the same verve and energy as the old. The band doesn't appear to be in their usual form though, bar Caleb, who seems overwhelmed that the crowd is being as enthusiastic as they are. "We thought you guys were gonna be so dry" he says in a Southern drawl "what's happened to you?" He seems to be really enjoying himself while the others are nonchalant.

'King of the Rodeo' and 'Taper Jean Girl' are both disappointing, the rhythm changes are sloppy and the lead guitar keeps falling out of tune. The band doesn't seem to notice. 'Pistol of Fire' and 'Razz' however are unleashed in a manic fashion, coming across taut with nervous energy, in a manner that the Kings do best.

'Milk' is the highlight of the set. Caleb's vocals are perfect, soaring and pained. It's a welcome respite from the pounding guitar and offers a breather to the crowd to gather their thoughts before losing their minds again to an amazing version of 'Tranny'. 'Red Morning Light' loses its' rhythm again, badly and the guitar is once more out of tune. It's the first time I've ever seen them play where they've sounded like they hadn't rehearsed in months.

'California Waiting' and 'The Bucket' pick things up a bit but it's perhaps too little too late, as the band leave the stage in a flurry of looking like they've somewhere better to be. Which, as it turns out, is the bar next door.