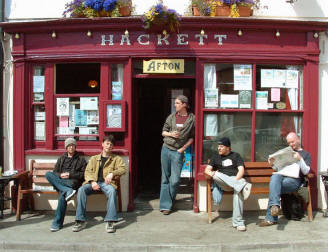 Review Snapshot:
Low-key Saturday night gig from up and coming group Juno Falls promoting their Starlight Drive album, with some great support from local heroes Mongoose and a fresh-faced bunch called the Sneakies.

Full review:
Located above the Old Oak Pub, it was the 'nice'n'dark' Cyprus Avenue which played host to this Saturday night gig from upcoming four piece Juno Falls, with some very impressive support being supplied by local stalwarts Mongoose.

First up however were a frighteningly young bunch called The Sneakies. A fresh faced three piece employing a bass, guitar and piano, the first question you find yourself asking about The Sneakies is: how the hell did they get past the bouncer? The second is: where the hell did they learn to right songs so well? Their music is melodious piano focussed pop (most of the dongs are about breaking up with the aul doll, like) and they display a winning happy-go-lucky attitude and surprisingly confident on-stage presence. A bit like if (the other) Keane had attacked a bunch of sixteen year olds.

Seeing as Juno Falls are reviewed elsewhere on this site I'd like to talk for a while about second support band Mongoose. They cheekily dedicate one of their new songs 'Coming of Age' to the Sneakies - but it's something they've obviously done a bit of themselves since returning from a brief tour of New Zealand and Australia last year. A band I would consider to be one of Cork's best kept secrets, it's hard to know where to begin with them - a feeling no doubt shared by the soundman - as Mongoose are a seven-headed rebuke to the theory of 'less is more'.

At this stage veterans of the Cork gigging scene, they are rapidly becoming in need of bigger stages to hold their talent - in more ways than one. Tonight they are without the services of their powerhouse drummer, yet there are still six instruments on stage all baiting you with hooks and vying for attention. It's easy to think what the hell do they need all those band members for until you start to look at what each one brings to the table. The chiming melodies between guitar and mandolin meld perfectly with the woozy fiddle lines provided by Trish and Ciara, flowing together over an ultra tight rhythm section of bass and djembe.

Add in Graham McCarthy's vocals, which have a yearning to them that jerks your head up from your beer, and you have a cocktail that can both tug on the heartstrings and whack a powerful punch - often in the same song. They're a hard band to buttonhole, but perhaps alt.country with a trad twist or nu-folk could be used as tags. Either way it's a sound that suggests Whelan's could become something of a spiritual home for them, if they ever actually make it up to the Big Smoke for a gig! With a classy EP under their belts and another stint in the recording studio due soon, hopefully it will be sooner rather then later.

Their methods are perfectly encapsulated in older songs like 'Summer Still On', and distilled further in newbies such as 'Opaline'. Hooks kick in, go off in a different directions, seemingly get lost on a tangent before bringing you back to the original familiar hook again. This is clever stuff, at times perhaps a little toooo clever, and occasionally their songs can be a little overlong and try and fit too many ideas in. Then again, it's not often you can criticise a band for trying to fit too many good ideas into their tunes.

There are also times when you wish they'd, if excuse my Irish, grab you by the b*lls a bit more. With songs this good there's no need for the in-between song banter to be so self-deprecating. Just for once it would be great to see them strut onstage and declare "We are the seven-headed beast that is Mongoose, and we are here to fiddle you pink, djembe beat you stupid and urinate on you with our chiming mandolin lines". Or something like that.

Juno Falls have no problems with confidence, which could have something to with having recorded one of the best Irish singles of the year in the shape of 'This Song is Your Own', while follow up 'Kiss Me' is already getting played on national daytime radio. Tonight the former song in particular is delivered with an extra wallop of live energy, pounding drums adding extra momentum to its already cool swagger.

The band's vocals and melody lines often call to mind Turin Brakes, plenty of breathy loveliness backed up with twelve string acoustic guitar and complemented by a Fender Rhodes keyboard that, and sorry for sounding like an anorak here, comes with rotating speakers and looks sh*t-hot cool. Some of their songs have a vibe that call to mind the kind of affable American rock sound played by the likes of Goo Goo Dolls, or indeed Travis when they still used to be considered cool, while the singer is also prone to the odd Jeff Buckleyism (but shure then, who isn't these days?). Elsewhere, their more inventive moments at times remind you of Gomez (and that's enough references for one paragraph).

Again, to paraphrase Tenacious D, they rock you gently and - er - ball you discreetly rather than pummel you into submission. "Every now and again we do like to rock out", the stool-perched singer confides at one point. Well then do more of it, I say!