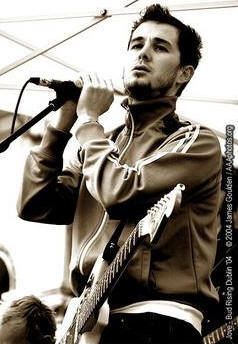 Review Snapshot:
Tipped by many as being one of the big rock acts to watch out for in 2005, Jove prove that they still have a lot of work to do on their sound before they conquer even a small venue.

Full review:
A shadowy veneer mirrored from the River Liffey onto the dusty streets of Arran Quay on this freezing cold Friday night. Inside the Voodoo Lounge, away from the quiet night, the venue was even quieter. Candles light the place but there is nothing romantic about this gritty rocker avenue. Just as the sound check commences, it becomes apparent that the sound system is pretty bad. Is this the right venue? It's the Voodoo right, not Doran's? Dark, grungy, poor sound system, Voodoo = Doran's On The Quays.

Support on the night came from rising rock outfit Jaded Sun. From the start of their set, it was obvious that they are a work in progress. Silhouettes of three guitarists, a drummer and a lead singer were all projected over the stage. With some chopping intros, destructive drumming and digestible rock, Jaded Sun sounded like the rock band that has been missing in recent times. Things started to deflate quickly as their song structure became very predictable and there were too many winding riffs thrown in. Their sound is made up of large doses of Zeppelin-sequel authority sugar-coated with indie rock finesse. It is a welcome sound, especially with some of the sublime guitar playing being produced, but some ingredients are yet to be added in order to elevate them towards being a potentially great band.

Time ticked by painfully without any atmosphere before the main act arrived on stage. For a Friday night in any venue, the size of the crowd was embarrassing. Concentration soon fell upon the movement of the sexy barmaid who elegantly scuttled along serving the few customers that were present. Even when Jove finally did show up, their first track didn't do much to take the attention away from the barmaid. A concoction was served up, that of Snow Patrol mixed with a helping of Muse and a dash of Radiohead but it was not as appealing as it might sound. The tempo stayed at mid-level resulting in a lack of appealing entertainment. Jove struggled on playing to a small crowd through a bad sound setup.

The keyboard playing by Paul O'Hara added a little flavour to the mostly monotonous guitar playing but a spark of creativity failed to appear on song after song. It became almost like rock music for insomniacs. Mediocrity ran riot as the earlier hints of Muse slowly morphed into Keane with guitars. Walsh's vocals were neither welcoming nor exhilarating and the music carried a blandness right through. Even the barmaid was checking her watch as the set dragged. It wasn't until 'February' that things started to liven up. They can make a gritty song appealing but fail to make an upbeat song catchy. The guitar playing could have more involvement in the way of hammering licks while the drumming and keyboards just need a little tweaking. The vocals are too distant to connect with an audience (they might however be different on CD) and an inclusion of more backing vocals wouldn't hurt either. An element of surprise is needed in their sound with more rocking beats for a rock band. It's a pity that the music isn't as good as it could be because the lyrics stayed consistently impressive ("And so you find yourself alone again / reciting sad, sad words that never end" from 'February' being one example).

Yes, the sound was terrible and Jove cannot be blamed for that but tonight their set wasn't one that would make people feel justified for parting with their money to see the band. With more work on their sound and stage presence, Jove could well turn out to be one of the brightest acts on the Irish scene. As things stand though, one has to ask: 'What do they really offer?'; and 'Can they really fill the Olympia?'