The Heineken Green Energy Festival kicked off in Dublin Castle on a splendid Friday afternoon. The famous cobblestones from previous years were nowhere to be seen, as the stage was set up on the grass area in front of the Chester Beatty Library. A slight breeze whistled in the air as the early crowd made their way toward the stage. 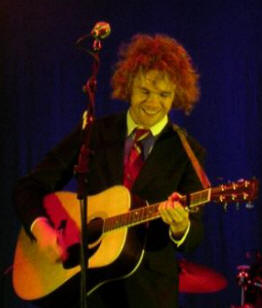 Mark Geary opened the show with a thumping version of 'Gingerman'. There wasn't really enough of the crowd in yet to engage with the singer/songwriter. Nevertheless, he went on to perform a great set that was a hybrid of old and new tracks. 'It Beats Me' was held together by easy strumming with oodles of charm, 'America' stepped up a gear while 'You're The Only Girl' followed with its harmonious magnificence that will easily develop itself into a Geary anthem. Josh Ritter then came out to add backing vocals to 'Ghosts', a song of sparkling elegance. The crowd were by now all on their feet appreciating the quiet genius of Geary. 'Volunteer' closed his set with an electric riff tingling the spine and warming the heart.

The ever-impressive Bell X1 kicked off with 'Snakes & Snakes', the first track from their latest album 'Music In Mouth'. A playful version of 'Next To You' dedicated to Mark Geary followed with drums, keyboards and semi-acoustic guitar giving it a new live lease of life. Paul Noonan revelled in the front man role with a stage presence similar to Beck. Vocals of smoky whispers controlled 'Beautiful Madness' while a banjo riff brought a rousing tone to 'Alphabet Soup'. The upbeat set continued with a new catchy tune 'Monkey 61' arriving before latest single 'Eve, The Apple Of My Eye'. While Noonan became the centre of attention, each of the other band members excelled with rushing guitar playing, thunderous drumming and Ray Manzarek type electronic keyboarding. All of these skills gelled together on a rocky take of 'Tongue' and a mellow 'I See Your Heart & I'll Raise You Mine' that rolled with emotion backed up by wheezing harmonica. Bell X1 delivered songs of encaged beauty on top of a great live performance.

As the evening sky fell, Mark Geary treated the crowd that waited patiently for the main act to arrive with some of his new songs. Album versions of 'You're The Only Girl', 'Midnight Song', 'Ghosts', 'Apron Song' and 'Hold Tight' were all played through the massive speakers on either side of the stage. Each song sounded great and provided a taster of the new album 'Ghosts' that is due out on August 27th. There was a very chilled out vibe around Dublin Castle as many relaxed on the grass with their plastic cups of Heineken, waiting for Josh Ritter to grace the stage with his presence.

At about 9:15pm the headline act arrived on stage with his trademark-charming smile stretching wide. As he started with a sturdy version of 'Girl In The War', the tension grew into an atmosphere of excitement. A lot of the songs that Ritter performs are exemplified through his live persona. On record he is a prince of storytelling, but when performing live he is a king of myth-making. The husky vocals on 'Bright Smile', the array of sweetness on 'Roll On' and the brilliantly executed 'Me & Jiggs' proved why this man is so popular on Irish shores.

While singing solo on 'Wings', a silhouette of Josh reflected itself against the stage. The delicate strumming and intelligent lyrics took the listener away to the railroads that he sings about. 'Harrisburg' roared, 'Leaves & Kings' bellowed and 'Otherside' had a perfect blend of instruments along with that Ritter magic. A scintillating take on 'Kathleen' was echoed by the crowd's participation, the first time that they get their voices are really heard.

The grounds of the Castle really erupted when a rocked up 'Snow Is Gone' was played. It was followed by a stripped down solo version of 'A Country Song' that had an almost gothic feel to it. Mark Geary reappeared to add his vocals to the Everly Brothers classic 'When Will I Be Loved', a playful tune that invited the night's sky out with such grace. The evening ended with the acoustic sound of 'Fireflies' that had the crowd swaying and everybody smiling.

The whole gig was a truly magical experience. From the delightful Mark Geary to the excellent Bell X1 to the wonderful Josh Ritter. A night that this crowd won't forget in a hurry.