Live acts can best be judged by how they deal with open spaces. Last seen on these shores closing the Witnness Cafe Stage in July, Josh Ritter provided a true oasis for those fleeing the obnoxious attitude and excessive ego emanating from the Main Stage-bound Gallagher brothers. Tonight's sold out show proves Josh can fill a place with punters, but what about the all-important atmosphere pervading the room's empty spaces? 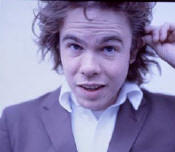 A solitary figure onstage, Josh's easy-going, ah-shucks attitude and genuine charisma expand faster than ego to fill the room and he instantly bridges the gap between artist and audience. Sporting a brown suit the colour of rich, Midwest American soil, he wears his country influences on this sleeve. No, it's not just the ghosts of Patsy Cline and Townes Van Zandt who seep into his songs, he's also influenced by the countryside that stretches between the East Coast and his native Idaho; a place of expansive horizons where skies are high and roads are long and dusty.

Several new, country-tinged songs ease into tonight's set thanks to the attentive audience before 'Me and Jiggs' jars them out of their hushed silence for a sing-a-long session. A cover of Leonard Cohen's 'Chelsea Hotel' elicits giggles while Josh's mad-scientist-meets-authoritative-auctioneer song of lost love, 'Stuck to You', induces deep laughter. A natural storyteller, his humorous anecdotes of life on the road easily fill the spaces between songs. For the encore Josh brings opening act, Mark Geary, onstage and then leaves giving Mark the solitary spotlight for a song. Josh himself sings about a 'Beautiful Night' before exiting the room and then re-entering to greet people personally.

Josh Ritter proves that a lack of attitude, but lots of authentic atmosphere and a solid connection with the crowd is how to best fill in those open spaces.