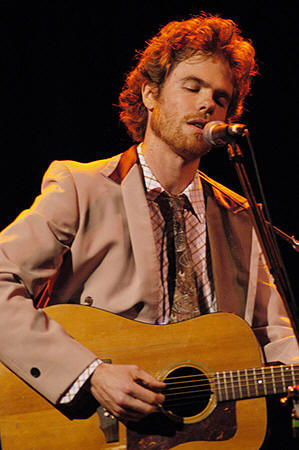 Review Snapshot:
A constant congenial smile on his face, a crowd of admirers with cowboy hats, a backing band that are sturdy and complimentary, a catalogue of amusing anecdotes and an arsenal of songs that easily outweigh the majority of his contemporaries... Josh Ritter, what more could you want?

Full review:
The Fiddlers Club is a nice joint in Bristol, filled with a folky atmosphere and bar-staff who know how to pour a pretty proper Guinness; this is certainly the place to be on a Wednesday night. It's sparsely populated, that is until Nicolai Dunger comes out on stage, and then all of a sudden a huge crowd is amassed around him and he magically gets everyone to sing along and provide backing-vocals to his numbers. It's a magnificent performance, with songs like 'White Wild Horses' and 'Hey Mama' really standing out, he leaves the stage and the audience are left thinking that he'll be hard to beat.

But then Josh Ritter and his band take to the floor, he comes on with the biggest smile between his cheeks and plays the haunting 'Idaho' solo, the crowd is wowed. He moves on to other instant classics fromThe Animal Years and effortlessly draws brilliant sounds out of his guitar and his voice, the rest of the band now providing an accompaniment that's set everyone's spines tingling. 'Monster Ballads' is commanded with brilliance, 'Girl In The War' is just fantastic with its live reworking?

After a while he starts to drop funny anecdotes into the mix between song and they manage to touch the funny bones of the audience. He genuinely seems to be the happiest man in the world to be up on stage playing his songs? People are enthralled throughout and the concert really starts to lift a notch with 'Lillian Egypt', which features Nicolai singing along with the band on stage. It's 'Golden Age of Radio' that gets everyone singing, dancing and yeehawing. Josh dons an audience member's cowboy hat and kicks up a real shindig that no one's left out of.

He ends on a brilliant rendition of 'Hello Starling' and then disappears before the stunning encore of the epic 'Thin Blue Flame', which is gloriously special. It's extremely refreshing to see a man enjoying his profession, with a permanent smile fixed to his face. It's evidently infectious, as everyone leaves the gig with the very same smile on their faces.