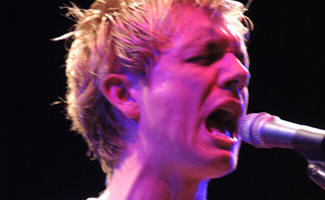 Review Snapshot:
After watching this feared-dead group at work, it's easy to understand the excitement which has surrounded the return of JJ72. With echoes of an agonized Turn, JJ72 prove themselves to be enduringly one of the best Irish bands around. Could they be the harbingers of the return of true Irish rock?

Full review:
Unexpected entertainment from idiosyncratic singer-songwriter Chuzzle warmed up the crowd. Willy Wonka with a voice akin to Arcade Fire's Win Butler, Chuzzle is alternative in every way, down to being nearly the only singer-songwriter with a full-time band. This usual 5-part group was down to two for this gig, but still managed to bestow upon us the same quirky and eccentric sound he has amassed such a following for, always catching the unsuspecting crowd off-guard.

Almost creeping on stage, they moved so quietly, JJ72 burst into an electrifying set. The TF Royal's Ruby Room was a practically perfect setting for this leg of their comeback: a small stage all but on the dancefloor creates an atmospheric intimacy ideal for their persistent, but never obtrusive, live energy. It was loud, still seats that visibly thump with the bass pulsating from the nearby ground-level speakers can only add to the fun?

The fact that they barely spoke did not detract from their almost palpable connection with the audience and meant that they could squeeze more out of the show that felt shorter than it was. Both throwing out - and gently pushing - songs both old and new: Oxygen, Heat, these are the songs that show from their popularity just how infectious JJ72s brand of rock really is. After one listen these songs follow you, and bury themselves into the recesses of your mind, leaving you wanting more. No wonder this band became so integrated into our musical lives in such a short time.

In every gig there is always just one image that sticks out in your mind. From this remains that of Mark Greaney's sweat-streaked face straining to expel the pressure building up behind the music, next to new bassist Sarah Fox's casual smile and almost cheerful bass playing. This could be used as an illustration for their sound, juxtaposed pain of expression and an ease and comfort with their art.

The only disappointment was when the band quietly stole off stage for what everyone though was an interval until the resident roadies started dismantling the equipment. However, I doubt JJ72 will slink away from music after the release of their eagerly-awaited third album this summer.