Live in the Temple Bar Music Centre, Dublin on 16 November 2006 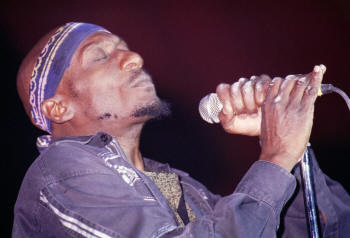 Full review:
Jimmy Cliff is a legend, undeniably, and deservedly. He first hit the big time in 1964 with "Hurricane Hattie" and went on to pen such greats as "Sitting in Limbo," "You Can Get It If You Really Want" and the album "The Harder They Come." The Harder They Come is a soundtrack to the film of the same name, and is credited as being the first record to bring reggae from the green pastures of Jamaica to the wider world. To put it simply, Jimmy Cliff is a big name in reggae. There is simply no denying the man's talent, passion, and charisma.

Unfortunately, Mr Cliff seem to have undergone a bit of an artistic dive-bomb in recent years. I suppose the word's "re-working", "electronica", and "modern audience" never really bode well, but in Jimmy's case I really didn't think it could signify this level of mediocrity. Somehow one of the forefathers of reggae has gone from making uplifting, soulful and sincere music, and entered the shudderingly saccharine world of Disney-reggae; commercial, misplaced and pure shite.

The gig was moved from tripod at the last minute, and a lively crowd eagerly awaited the arrival on stage of the legend, buoyed by some pre-gig lubrication and a quality DJ. Something was definitely in the air, this had all the hall marks of an amazing gig, hell just hearing the horns warm up back stage was spine tingling. The first few tunes were quite poor, but the musicianship was top-notch. It could easily have been the "token new material" section, later written off as a poor opening to a quality gig.

I awaited the last tune of the last encore in bewildered hope before finally settling into a rut of disappointment and shock, even the classics were reworked into casio tinged banality. The topping on the dubiously coloured cake was a cover of The Lion King's "Hakuna Matata" sung with world saving passion and belief? shockingly, horrifyingly bad.

The crowd never gave up on him, and Jimmy gave his all, clearly believing in his material. He came on for more than one encore, was applauded loudly, but never ever lived up to the potential. One saving grace (and the only reason the review gets a grudging '2' was an acoustic, drum based cover of "Rivers of Babylon" it was lovely. Then again that was the frustrating thing about the gig, it wasn't 100% bad, glimpses of genius shone through; illuminating the reality, and making it frustratingly unbearable.

I have never, ever been so disappointed at a gig. It was bad, very bad.