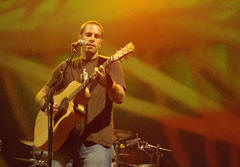 Review Snapshot:
Jules Jackson pulls on his hoodie and joins the rest of the Irish surfing community for the debut Irish gig by Jack 'The Sound of a Thousand Surf Shops' Johnson.

Full review:
Jack Johnson, the Hawaiian born surfer, filmmaker and singer/songwriter is that rare thing in popular music today, an artist who emerged gradually from a cult scene, as opposed to one who was manufactured overnight by a svengali, hyped up by the NME or launched over the Internet.

Johnson was first championed by Ben Harper after one of his music tapes, distributed through a variety of surf shops, found its way into Harper's possession. The upshot was Johnson's debut album 'Brushfire Fairytales' in 2001 which became a surprise hit, making it to number 34 in the Billboard charts in 2002. Johnson has since gone on to become the pre-eminent modern practitioner of surf pop in the tradition of such artists as The Beach Boys and Dick Dale. His entry in Matt Warshaw's 'The Encyclopaedia of Surfing' states simply that, "he has perfected the art of contemporary beach music". More recently Johnson has made the transition from cult artist to mainstream pop star, thanks partly to the Ben Stiller video for 'Taylor' which was play-listed on VH1, a guest appearance at the 2006 Brits and the ASDA television advertisement for his album 'In Between Dreams'. Go figure.

As a result Johnson's debut Irish gig at Vicar Street was hastily rescheduled for the Point Theatre, a move which led more than one surfer I talked to on the night grumbling about how they would have preferred to see him in a more intimate venue. The move was made to accommodate Johnson's rapidly expanding fan base which consists in Ireland of the prerequisite gang of scraggly surfers like me, as well as legions of South Dublin 'Ohmigod' fake tan OC wannabes.

The surfers saw this as a chance to kickback and chill out in the presence of someone they admire as much for his skill on a shortboard as for his music, the babes because they think Johnson is 'hot' (a phrase much used by the two chicks sitting beside us at the gig, and whom we had to politely tell to zip it after they talked incessantly, like totally, for the first three songs of his set. Ohmigod!)

In my opinion, it is impossible to fully appreciate or understand Johnson's music, no matter how much you like it, if you have never gone surfing. By that, I don't mean that you have to be Sofia Mulanovich or Kelly Slater, but you must have tried it at least once, if only in breaking shore surf with a foamie, to get where he is coming from. Johnson's music effectively captures the 'stoke', the feeling that you have sitting out the back waiting for the right wave or after a 'sick session' (good day's surfing). That feeling is hard to describe in words and Johnson doesn't try to, preferring to sketch it in musical terms with his slow, mellow rhythms and gentle melodies.

Mellow was certainly the key phrase for a gig which began when Johnson strolled on stage with his band without being announced and proceeded to run through a set of songs to which the audience knew most of the words. 'Symbol in My Driveway', 'Taylor', 'Banana Pancakes', 'Times Like These' and 'Sitting, Waiting, Wishing' all got an airing, as did some great new songs such as, 'Girl, I Wanna Lay You down' from the 'Breakdown' EP and ' We're Going To Be Friends' from the 'Curious George' soundtrack. Each successive tune was greeted with rapturous applause and the sort of female screaming you normally associate with a Westlife concert, not that I would know.

Johnson doesn't really change pace live, all his tunes fall into the same groovy, laid back tempo and I spent the gig with my head bowed and my eyes closed, tapping my foot along to the music. He has also successfully blended diverse influences such as Cat Stevens, Bob Marley, Hawaiian Ukulele music and what I discern as a fondness of Marvin Gaye's vocal phrasing into his overall sound.

After the main set had finished, Johnson walked back onstage solo with an acoustic guitar and treated us to an encore set that included a sublime version of his new single 'Better Together'. After that, Johnson strolled off stage again and the lights went up on a very stoked audience. As I said before, it's the first time Johnson has played Ireland, although he has visited before to go surfing with Ritchie Fitzgerald in Bundoran, but it won't be the last. Maybe next time, he'll treat us to that intimate Vicar Street gig. In the meantime, aloha Jack, aloha