Review of their gig in the Olympia, Dublin, 9th July 2001 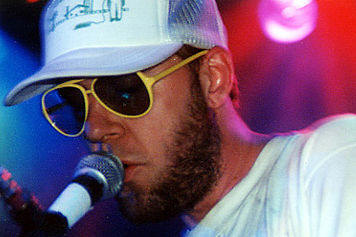 It was a last minute phone call from the CLUAS editor doubled with my curiosity that had me headed to their show on short notice. Though unfamiliar with most of their music, this was the most user-friendly band and audience I've ever encountered. Uplifting choral music provided a backdrop to Grandaddy's stage entrance and their first song was the even brighter and more uplifting 'You Are My Sunshine'. Like the audience, the music continued to be consistently relaxed, warm and wonderfully welcoming throughout the night.

This gig turned into an I-don't-know-the-song's-name reviewer's dream. I literally just had to read the signs. Yep, a video screen behind the band displayed pastoral scenes with the camera slowly shifting to strategically placed signs hinting at the song titles. There were signs from the audience as well - aural ones. The loudness of the hoots and hollers at the beginning of each song accurately reflected its quality starting with 'I Need You' (as the sign said).

Tucked in my seat in the darkest reaches of the audience right lower circle I started realising all was not quite right when the band played 'Summer Here Kids' (according to the sign). The video kept displaying car races complete vehicles breaking up everywhere. For my part, I was sure I was hearing something breaking up. It wasn't feedback and no soundman could be that bad, but there was distortion during some of the songs that, quite simply, blocked out the important Grandaddy keyboard sounds. During the incredibly striking 'The Crystal Lake', I'd had enough and decided to strike out for clearer sonic shores. I wandered to a free seat in the audience left balcony where the music became crystal clear with undistorted sound waves. Soon I was wallowing in what I'd been missing.

After moving, I realised how incredibly moving the music really was. The formerly inaudible piano could be heard highlighting the brilliant 'So You'll Aim Toward the Sky' (from the sign). Sitting up in my 'sky' seat I was impressed with the band's distinct vocals, melodic capabilities and warm relationship with their audience. I also realised I remained as impressed as ever with the Olympia as a great music venue (but PLEASE fix that audience right speaker upstairs because certain frequencies and sounds cause distortions that are both distracting and aggravating!)

Both of my Grandaddies might be dead, but Grandaddy the band is both alive and quite brilliant live. Catch them next time around. Believe me, encountering a Grandaddy for the first time can be a pleasant surprise.