Review of their gig in the Ambassador, Dublin, 19 November 2004 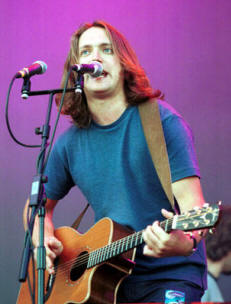 Review Snapshot:
Ok Gomez arrived and left Dublin with little advertising yet the venue was sold out. Little wonder as they are classed as an outstanding live act. Their US dates were all sell-outs and the reviews were shining. Folks, Gomez are back on our musical menu and are here to stay.

Full review: If you could bottle the energy and power in the Ambassador on November 19th you would have found a new power. Gomez, in a word, were awesome from start to finish. The band discreetly came on before nine and went on to deliver a spiritual two and a half hour set. Ben Ottewell started with 'Get Miles' which got Gomez fans delirious and virgins to the band turning their heads with a dazed look of "Wow" .

The band continued to launch classics from their first album and after 15 minutes had the 1200 capacity audience eating out of the palm of their hands. I really do not know who was enjoying themselves more, the band or the audience. Personally when they played 'Rhythm and Blues alibi' from their second album I was transported from Dublin to that little place of musical Shangrila. The covers of 'Black eyed dog' which seamlessly melted into the Stones' "Fade away" lifted the roof. Mixing the old with the new and loving the crowd was their charm.

Their two encores left the theatre vibrating and all the expectant mothers in the next building (Rotunda hospital) could only hear a distant chant of "We want more, we want more".

And more we got. With the house lights on and a midnight gig 20 minutes away, the 5 came back on and brought the crowd to a frenzy with "Whippin Piccadilly".

I travelled 200 miles to see them. I spent a mint in Dublin. I ended up half deaf from being up too close. And sick as two small hospitals next day. Would I go again I hear you ask? Bring it on!