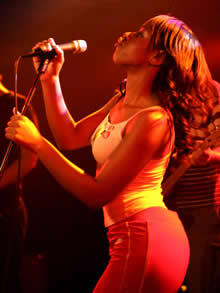 Full review: The Go! Team appeal to the inner child in all of us. The bargain basement production values of their debut, "Thunder, Lightening, Strike", make it sound like it was recorded on a Playskool Cassette Player. The kaleidoscopic mish-mash of styles on the album reeks of Skittle-induced attention deficit disorder. Even the band name is a throwback to Saturday morning marathon cartoon sessions. The only thing they seem serious about is having fun.

A seasoned cynic may retch at such gauche jollity, but plenty others willingly crammed into the Village to join the party. Besides, the fetid odour of stale Lynx and beer farts would have quickly reminded The Go! Team that their roots may lie in the playground, but they are in strictly over 18's territory now.

The shameless exuberance they exhibit on record is reciprocated on stage. Front-woman, rapper and cheerleader, Ninja, bounds about like a Blue Peter presenter who's overdosed on E-numbers. Band-leader, Ian Parton, hyper from beginning to end, makes spirited dashes from drums, to guitar, to harmonica. Look away momentarily and the whole band has re-jigged. Except for the bass player, who just plays bass. Who let him join?

The six have that New Band Vibe, where everyone seems to be enjoying themselves an awful lot. No one is chewing on methadone jellies, no one is paying alimony to their third wife, everyone appears to be on speaking terms with each other; it's almost surreal to see a band this happy. But it's not cloying; it's unadulterated enthusiasm and it quickly extends to the audience. It's a sea-change from the shoe-gazing diffidence or smarmy self-assuredness we are normally treated to.

What is unfortunate is the flaky PA, which occasionally makes the band sound like they're performing under a soggy duvet. While some numbers survive the hatchet job, big tunes like 'Bottle Rocket' and 'Get It Together' limp out over the system; vocals are muddy, instruments are played but not heard. The irony is that the awkward prospect of transferring the quirky, cut-and-paste pop of the album was successful, but its lo-fi production values inadvertently hitched a ride.

The brevity of the album was also matched by the gig. After a brief untitled encore, they scamper, leaving a bewildered audience tapping their watches. They may have a shortage of material, but at least for The Go! Team throwing a decent party is kid's stuff.