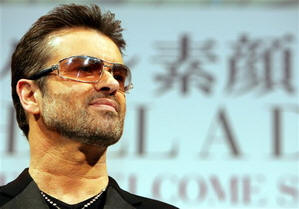 Review Snapshot:
George Michael manages to stay awake for more than 2 hours and puts in a riveting performance to rival that of any of today's top performers by declaring "I can't drive, but I can sing", ahead of his Dublin gigs in December.

Full review: As two giant curtains dropped, one from each side of the huge projector screen in the Palacio De Deportes Arena I could see the band on three different levels, but no sign of the main man. He hadn't fallen asleep had? Suddenly we could hear him singing 'Waiting (Reprise)' and right on cue as he sang the final lyrics "?.here I am", the projector screen rose up and he walked out to thunderous cheers and applause.

Wearing a black suit and matching shirt he danced around the stage to 'Flawless', and on 'Fast Love' he invited the crowd to sing the "ooh ooh baby baby" bit while scenes from the aforementioned video appeared behind him. "We're gonna go back, I think you'll like this one" was his introduction to 'Father Figure' and he stayed on the stool for a moving rendition of 'The First Time Ever I Saw your Face', the only cover of the evening.

He stuck with the ballads and was only accompanied on keyboards for the beautiful 'Praying For Time' but the he fans were soon singing and dancing for 'Too Funky', while the backdrop for 'You Have Been Loved' featured several personal family photos with one (possibly lost) member slowly faded out. 'Everything She Wants' was fantastic. George began, and as the percussions and backing vocals joined in. he again beckoned the 16,000 sell-out crown to join in.

Cartoon images of Bush & Blair appeared on the screens and George sang 'Shoot The Dog'. During this a giant inflated George Bush appeared with a smaller blow-up British Bulldog performing oral sex on the American President while his tail wagged frantically.

On the big screens a Jukebox appeared after the 20 minute interval and we all knew what was coming next. As the opening guitar-riffs of 'Faith' were heard, George re-appeared wearing a grey jacket and he covered most of the stage during this number.

'Spinning The Wheel' featured some 60s reel footage behind him, with shots of Marilyn Monroe, J.F.K. and Frank Sinatra among those featured. It was back to his Westlife-like pose on the stool for 'Jesus To A Child', and the laser illuminations were back on in full effect for 'An Easier Affair'.

Back to the 80s we went for the classic 'A Different Corner' before again inviting us to sing "..dah, da-da-da", the opening to 'Amazing' which we were only too happy to oblige with. Another Wham! jewel 'I'm Your Man' was again performed to perfection before a helicopter appeared on the screens with the cleverly written 'L.A. PEED' on the side of it. This could only mean one thing.

'Outside' was next, and what a crowd pleaser. It sounded excellent live, superbly performed by his 15-piece backing band. "Thank you very much, you've been fantastic, goodnight" were his parting words but there was more to come.

An encore of 'Careless Whisper was the night's highlight for me and again he acknowledged the crowd before leaving the stage for the second time.

As the majority of the audience started to drift out and the time approaching 12.45am back came George for a second encore and had the place in a frenzy for 'Freedom 90'. "Goodnight Madrid see you soon. Well maybe not. See you again" were his final parting words and this was the end.

Sadly there were no new songs like the forthcoming duets with Mutya, and Paul McCartney, or the new track 'Understand' but do expect the set list to change prior to his December Gigs here, following the release of the 3 CD Greatest Hits set, the double DVD, and not to mention the new Christmas song he has written.

I recommend you get to see him as he won't tour again. The band was superb, the set illuminating, he was vocally brilliant, and the performance, absolutely flawless.