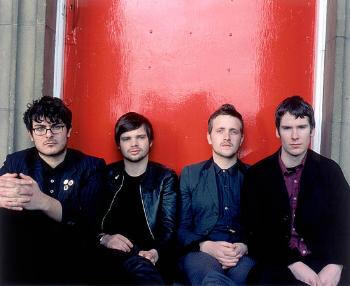 Review Snapshot:
The Futureheads play their first Irish show as part of the Heineken Green Room Sessions. Would it be any good? Probably.........Wait, isn't that Carlsberg?

Full review: The Futureheads self titled debut album offers instant gratification. It's a blitzkrieg of new wave punk with sing-along choruses and a jaundiced worldview. You sit up and take notice. For its half hour duration at least.

Live, they are ruthlessly efficient. From the opener, 'Decent Days and Nights', to encore of 'Le Garage', they bash out a relentless set of pulsating, post-punk knock-offs, citing everyone from Devo to the Clash.

Rock genealogists will state 'It's all been done before', but the Futureheads' idiosyncratic acapellas give them a head start over the more trying, new wave bottom feeders. The deliciously skewed 'Hounds of Love' typifies this, as they toss about vocal duties with careless abandon. Bassist Jaff will harmonize with guitarist Ross, while lead man Barry absconds to do some rock posturing by the drum kit. The audience are intermittently required for backing vocals. And about half oblige.

This was a Heineken Green Room gig, and getting the Futureheads for their first ever Irish show was notable coup for the beer barons. However, the audience for these invite only affairs tends to be a ragbag mixture of the muted and the maniacal. Some clearly would have moshed over hot coals to get in, while others seem content with the free entry and complimentary bottle of beer.

Playing in front of a similar amalgam of guarded A&R men and specious zeitgeist chasers is a well worn path for all new bands, including the Sunderland tyros, and perhaps it has had an impact on their live show. At times it felt like a showcase, with the album's standouts like 'Meantime' and 'Manray' replicated with a clinical note-for-note slickness. With a rougher hue and a riskier attitude, these identikit renditions could have been explosive.

But the Futureheads have every right to play it safe. To avoid withering on the vine like other NME pin-ups, they have adopted pragmatism in their live show. It may not be as incendiary as one expects but it has helped maintain the momentum of their neat debut album and cemented their reputation as one of the year's spikiest new acts.

Feel free to discuss this review on theCLUAS Discussion Board.